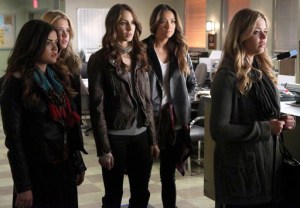 Pretty Little Liars‘ fifth season premiere introduced an evil new army, another dead body and a little liar’s dark side — among other things. But with new developments come new questions, so TVLine hit up executive producer Marlene King for some answers.

Below, King discusses the premiere’s “killer” twists, as well as what we can expect from the rest of Season 5 — including which member of the PLL crew will soon spiral out of control.

TVLINE | Congratulations on getting picked up for Season 6 and 7.
Thanks! Yeah, it’s exciting and a little daunting all at the same time.

TVLINE | Does adding two more seasons affect your end game, or just the path you’ll take to get there?
Early on in Season 4, we started getting calls from the network saying, “We’d originally talked about five seasons, but you have to wrap your brains around the fact that there will be more.” So we started changing the path in Season 4, figuring out how to keep it fresh, and that’s what I love about this season. It was written knowing we’d have a sixth season, and probably a seventh, so we got fired up to keep it really fresh. TVLINE | I’d say turning Aria into a killer is one way to keep it fresh.
Absolutely, and it was a very conscious decision to shake it up with a premiere that felt like nothing we’d ever done before. Along with the news of Season 6 and 7, I think some fans got nervous that it meant we’d keep dragging things out, so we wanted to assure them that the show is going to stay really hot.

TVLINE | So now that Aria’s tasted her first kill, albeit accidentally, how will that affect her?
[Laughs] It affects her tremendously. One of the questions the girls have always asked is “Why did Ali pick us? Why were we the team she put together to be her friends?” And those answers will come. One of the reasons she picked Aria is because she’s so compassionate, and now that — as you say — she’s tasted her first kill, it will affect her dramatically. And traumatically.

TVLINE | But the police don’t know she did it, so there won’t be any criminal repercussions, right?
Well, that’s another question: Will there be, or won’t there be? It’s certainly something the girls are worried about. They’re walking away from Shana’s body hoping to never hear about it again, but hey, this is Rosewood. All secrets remain in play for further torture.

TVLINE | The girls are going to have to adjust to having Alison back in their lives. Who will struggle the most?
There’s a moment in an episode coming up where Hanna is mistaken for Alison, and that affects her in a big way. She starts to rethink how she became the person she looks like now. Was she finding her true self, or was she just mimicking Alison? Right off the bat, Hanna is faced with a lot of self-doubt. TVLINE | She just needs to get some cupcakes in her.
Or something else, maybe. [Editor’s note: I guess we know which PLL is going on a downward spiral with her boyfriend.]

TVLINE | On to Melissa, she’s still got that big secret, and Mr. Hastings is keeping her quiet. Can you even say what that secret is about?
It’s definitely a big secret, and we’ll find out what it is by the end of the summer, but that’s all I can say because I don’t want to spoil it.

TVLINE | I love the anti-Alison resistance Mona is forming. Is she a “bad guy” now?
It’ll be interesting to see how that plays out, but she’s definitely building her army. We’re having a lot of fun with that group and what they’re plotting. That definitely plays out this summer, and you’ll want to watch it unfold. She has definitely assembled a group of people who were tortured by Alison and are very worried that she’s coming back to Rosewood.

TVLINE | Including Lucas! I almost didn’t recognize him. Will we see more of this darker Lucas?
Yeah, oh my God, he came back with a total re-do. I love it! He’s had some time away from us, and this felt like the perfect time for his character to reinvent himself, like high school kids do. He was home-schooled for a while, so he made a conscious decision to be the new Lucas. He’s Lucas 2.0. And we find out a little bit more about his transformation in the 100th episode. TVLINE | Paige was very vocal about not joining Mona’s army. Does that have more to do with her feelings for Emily, or her feelings for Alison?
I think it just had to do with her own personal integrity and moral compass. She saw the anger building in the group as they started announcing their names, and it made her uncomfortable. What’s the lesser of two evils: to join an evil army or to face Alison alone?

TVLINE | Plus, giving into all that anger would just bring her back to that dark place, and she’s moved on.
I would certainly agree with that.

TVLINE | Now, let’s talk about Ezra. The girls are going back to Rosewood, but he’s still in New York, right?
Yes, he’s still in the hospital, but he survived and he’ll come back very soon.

What’s your take on the Season 5 premiere, as well as King’s new teases? Drop a comment with your thoughts — including any questions you still have — below.