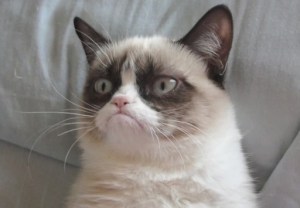 Lifetime is giving Grumpy Cat something to smile about.

The Internet sensation — who’s just a perpetually frowny-faced cat, for those of you who don’t know her — is set to star in her first made-for-TV movie this holiday season, according to The Hollywood Reporter.

Titled Grumpy Cat’s Worst Christmas Ever, the Lifetime original movie tells the story of a pet-store cat (Cat) who can somehow communicate with a 12-year-old girl.

Prior to Worst Christmas Ever, Cat has appeared on American Idol and had a front-row seat at the 2014 MTV Movie Awards.

* Eric Roberts (Heroes) has landed a recurring role on USA Network’s Suits, which returns for its fourth season Wednesday. Roberts will play Charles Forstman, a billionaire with a “his own ideas about how the game should be played.” Neither he, nor his all-important checkbook, will be easily swayed.

* Joe Adler has been promoted to series regular for The Mentalist‘s upcoming seventh season, Deadline reports. Adler has been recurring as FBI computer expert Jason Wylie since Season 6.

* Speaking of promotions, Samira Wiley — better known as Poussey Washington — has also been upped to series regular for Orange Is the New Black‘s third season.

* FX has decided to pass on Hoke, its pilot starring Paul Giamatti as a Miami homicide detective in the mid-1980s.