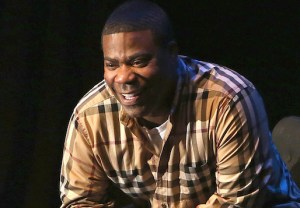 FX is clearing the air about the future of Tracy Morgan‘s upcoming FXX comedy series in the wake of last weekend’s deadly car accident, which left the comedian critically injured and claimed the life of his mentor James McNair.

“The only thing we are concerned with is the health and recovery of Tracy Morgan and the victims of this tragic accident,” read a statement from FX Networks and FX Productions. “We will support Tracy and his family in every way possible throughout his recovery. At the point when Tracy has recovered and decides that he is ready to go back to work, his show will be waiting for him.  Right now our thoughts and prayers remain with Tracy, the other victims of the accident, and their families.”

Morgan remains in critical but stable condition in a New Jersey hospital. On Monday, his rep called rumors that the ex-30 Rock star’s leg had been amputated “completely fabricated,” adding, “Tracy had surgery on his broken leg. We are working closely with the incredible staff at Robert Wood Johnson University Hospital to share information when it is available. This recovery will be arduous and we hope that you can be patient during this difficult time.”