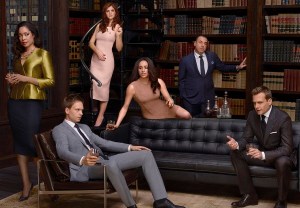 When Suits returns this Wednesday (USA Network, 9/8c), it’s student vs. teacher as Mike and Harvey draw the battle lines in their new working relationship.

And that’s not the only duo that’s threatened.

Rachel and her beau find themselves dealing with a number of challenges to their romance, and his pretty secretary is, shockingly, the least of their worries.

At least things seem to be going well for Jessica, who enjoys some male company.

HARVEY & MIKE | “When Mike left the firm and set up a situation where it was possible that [he and Harvey] were going to be working side-by-side on some things, we thought that might be good,” says Korsh. However, conflict makes for much more interesting TV, so Mike sets out to “prove himself” now that he’s out from the shadow of his mentor. But Harvey won’t easily accept that his protege is now his boss (in a way). “He’s not going to let this kid that thinks he’s smarter than him push him around.”

MIKE & RACHEL | Although Mike’s new Donna, pretty secretary Amy (played by The Newsroom‘s Melanie Papalia), is “a factor” in Mike and Rachel’s romance, Korsh warns that “she’s not the only factor.” In fact, as the season unravels, “There are other things that are going to be as much of a threat to Mike and Rachel’s relationship,” teases the EP. RACHEL &… HARVEY? | Rachel will go through quite a bit of “growth” as she becomes “more involved in the storyline this year,” previews Korsh. For starters, “She’s going to have much more involvement in the week-to-week happenings of the firm.” While that may be good news for fans of the legal eagle, it’s not so easy on her. “She’s also struggling with the exhaustion of being in law school and working at the firm,” he continues, which sometimes results in her “missing key pieces of information at key times.” Becoming an associate at Pearson Specter also means Rachel is “now working with Harvey, [which] is a new change for her. Obviously, she’s going to have a lot more scenes with Harvey. Their relationship is going to be explored.”

JESSICA | Guess who’s getting some?! “When we open on the premiere, we reveal that maybe Jessica is enjoying her personal life a little bit,” teases Korsh. “The idea for the premiere is, enough amount of time has gone by that maybe Harvey is back in the swing of things and gotten over Scottie a little bit. Maybe they’ve won and they put all these battles behind them. Mike’s been gone, and all of them, including Jessica, have been enjoying life a little bit… She’s maybe got a guy. We’re not sure if it’s a regular thing or what. Then moving forward, we’re going to explore her personal life.” DONNA | Because she’s all-knowing and awesome, Donna “sees the trouble that Harvey and Mike are headed for long before anybody else,” shares Korsh. “It’s like when a parent sees two siblings playing and they’re starting to get intense about what they’re playing. The parent knows that’s going to end up in a fight, but the kids are like, ‘It’s fine. We’re having fun.’ The parent knows they’re having fun now, [but] this is going to end bad.”

THE NEWBIES | DB Woodside (24) recurs as Securities and Exchange Commission prosecutor Jeff Malone, who will use his position to “strong-arm [the firm] into doing some stuff and put Jessica in an awkward position,” teases the EP. “He’s going to get his way a little bit,” which will bring about conflict between him and Louis as well as between him and Jessica. Meanwhile, Brendan Hines (Lie to Me) plays “a new client at the firm that is definitely going to throw some kinks” into the dynamics at Pearson Specter, as well as mess with the bond between Harvey and Mike.

Suits fans, be sure to check TVLine after the East Coast airing of the Season 4 premiere Wednesday for even more scoop!