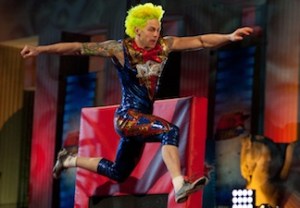 NBC’s American Ninja Warrior on Monday night drew 5 million total viewers and a 1.7 rating (per finals), down 7 percent and two tenths week-to-week yet edging out 24 for the nightly demo win.

RELATED | Mistresses Recap: Colors of the World (Spice Up Your Life!)