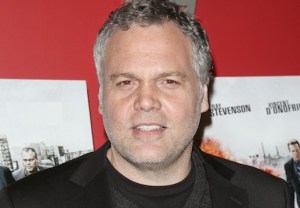 Vincent D’Onofrio will be eschewing law and order and focusing more on criminal intent, with a key role in the upcoming Netflix series Marvel’s Daredevil.

The Law & Order: CI alum has been cast as Wilson Fisk (aka Kingpin), a powerful businessman whose interests in the future of New York City’s Hell’s Kitchen neighborhood will put him in direct conflict with Matt Murdock (played by Boardwalk Empire‘s Charlie Cox) and the blind attorney’s crimefighting alter ego, Daredevil.

Executive-produced by Steven S. DeKnight (Spartacus) and Drew Goddard (Buffy the Vampire Slayer), Marvel’s Daredevil follows the aforementioned Matt Murdock, who at the time he was blinded as a young boy also was imbued with extraordinary senses. He now fights injustice by day as a lawyer and by night as Daredevil.

Daredevil marks the first of several Marvel hero series en route to Netflix, the sum of which will capped by an Avengers-like TV-movie. Production on Daredevil is set to begin next month on location in NYC.

D’Onofrio’s TV credits include a many-seasons run as Criminal Intent‘s Detective Goren and an Emmy-nominated turn on Homicide, while his film resume includes JFK, Men in Black and Full Metal Jacket.