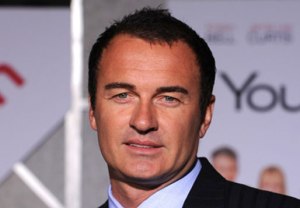 The Nip/Tuck actor, along with Spike TV, is developing suspense thriller The Chairman, our sister site Deadline reports. McMahon will executive-produce and possibly star in the series, which is based on Stephen Frey’s novel of the same name.

Set in the financial world, The Chairman centers on Christian Gillette, a Gulf War veteran who takes over a billion dollar private equity fund after its founder mysteriously dies.

Spike TV previously announced its events series Tut, which is set to premiere in 2015 as the network’s first scripted programming in seven years.

* This August, Doctor Who will launch its first-ever world tour to introduce Peter Capaldi as the 12th Doctor, BBC America announced. Capaldi, along with on-screen companion Jenna Coleman and EP Steven Moffat, will visit seven cities across five continents in 12 days, beginning in the U.K. on Aug. 7.

* Bryan Cranston could soon be returning to the small screen. Per Deadline, Steven Spielberg is in preliminary talks to turn All the Way — the presidential play for which Cranston won a Tony on Sunday — into a miniseries. Cranston would reprise his role as President Lyndon B. Johnson as he navigates his first year in office.

* John Doman (The Wire) has been tapped for a recurring role on Showtime’s drama pilot The Affair, Deadline reports. The series focuses on a husband and father of four who gets involved with a woman he believes is his soul mate.

* Universal Cable Productions has acquired the rights to Spin, Robert Charles Wilson’s best-selling sci-fi novel, in hopes of adapting the book into an event series, per The Hollywood Reporter. The post-apocalyptic novel follows three childhood friends who witness the stars in the sky as they mysteriously vanish.

* Less than a month after retiring, Barbara Walters will interview Peter Rodger, the father of UCSB shooting suspect Elliot Rodger, for an upcoming special edition of 20/20.