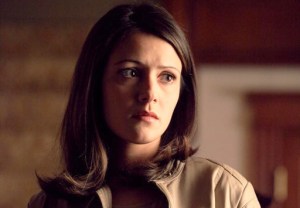 April Carver (Unnatural History‘s Italia Ricci) has a lot on her plate right now. She just landed her first reporting assignment, she’s making progress with a new guy at work and any extra free time is devoted to making sure her family doesn’t completely fall to pieces. Oh, and one more thing: April has cancer.

RELATED | Chasing Life Star: ABC Family Series Is About ‘So Much More’ Than Cancer

That’s how we’re introduced to April in the first episode of ABC Family’s Chasing Life, which premiered Tuesday. After passing out at a blood drive, she spends an entire day dodging her doctor — who also happens to be her estranged uncle — until he finally confronts her outside her house. Her reaction is an understandable mix of fear and denial; she attempts to throw herself into her work, despite the severity of her diagnosis, until she eventually breaks down in tears during a moment alone.

And aside from her uncle, that’s exactly how April is facing her fight: alone. She can’t bring herself to tell her mother (Hart of Dixie‘s Mary Page Keller), who “can’t remember being this happy” after returning from her first online date. And she certainly isn’t ready to tell her sister Brenna (Without a Trace‘s Haley Ramm), who’s already headed down a pretty dark path, herself.

She isn’t even able to tell her best friend Beth (I Hate My Teenage Daughter‘s Aisha Dee), whose idea of a “crisis” is far less severe than anything April is about to experience. Then there’s April’s love life, which is every bit as complicated as you’d expect it to be, given ABC Family’s history. She finally lands a date with her crush, an entertainment reporter named Dominic (Dance Academy‘s Richard Brancatisano), even managing to seal the budding romance with a kiss. But when Dominic overhears April speaking with her uncle, he gets the wrong impression and blows her off. Fortunately, she’s able to explain the situation before he gets too turned off. Phew!

(Side note: Do Ricci and Brancatisano have incredible chemistry, or what? You know it’s a match made in TV heaven when the audience is squee-ing over a first kiss in the pilot — unless, of course, that was just me.)

Anyway, just when April thinks she’s done being blindsided, she pays a visit to her father’s grave, where she meets another young woman who might just be — wait for it — her half sister! With everything going on in her life, do we really think April is ready to handle another potential Brenna?

I guess we’ll find out…

Will you continue Chasing Life alongside April? Rate the new drama below, then drop a comment with your full review.