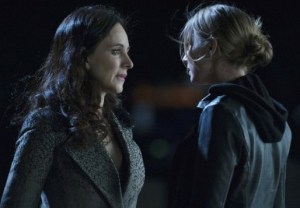 Revenge is adding a familiar face to its full-time cast, and, if you have yet to cue up the Season 3 finale on your DVR, you should head to another corner of TVLine now.

RELATED | Revenge Boss Reveals Why [Spoiler] Had to Die

Sources confirm to TVLine exclusively that James Tupper — whose presumed-dead character, David Clarke, turned up alive, well and wielding a knife in last month’s closer — will return in Season 4 as a full-fledged series regular. Tupper has recurred throughout Revenge‘s three-year run, but his appearances have been confined to flashbacks (on account of his alter ego being dead and all). David’s surprising resurrection in the final moments of Season 3 — and his now-confirmed return in Season 4 — sets the stage for killer reunions with daughter Emily and ex-love Victoria.

“Victoria and Emily are both going to have to reckon with what they’ve done in his name over the last 20 years, and then they’ll have to reckon with, “Well, who is this man?” show runner Sunil Nayar recently teased to TVLine. “It’s fun because, for the first time, the audience knows something that none of the people on the show do. The audience knows what he did to Conrad, they know what a raw act of vengeance it was. So the David that’s eventually going to come back to town isn’t going to be the David that the people in the Hamptons know, but the viewers have seen him and know what he’s capable of. That’s a fun dynamic we’ve never gotten to play with before.”