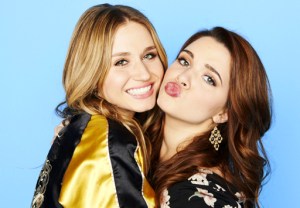 Looks like Amy and Karma’s lying game is far from over.

RELATED | Quotes of the Week from Faking It, Mad Men and More!

MTV on Monday announced the Season 2 renewal of its new comedy Faking It, which wraps its freshman season Tuesday at 10:30/9:30c.

“Faking It has proved to be the perfect companion show to Awkward, retaining nearly 90 percent of its lead in each week,” MTV Programming President Susanne Daniels said in a statement. “We’re excited about Carter Covington’s delicious plans for season two.”

Thrilled about the renewal, Faking It fans? Drop a comment with your thoughts on the news, and tomorrow’s finale, below.