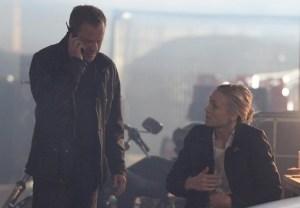 This week, Fox’s 24: Live Another Day staged the ultimate (and a probably unavoidable) showdown, pitting the mighty Jack Bauer against a terrorist-guided drone. How do you think that turned out?

The hour opened with Simone being carted away by EMTs after getting walloped by the city bus in the midst of chasing her freshly orphaned niece. Chloe manages to get word of the Very Important Accident Victim first, leading Jack and Kate to the hospital, where they hope to gain intel on Margot’s location. After Kate chats up Simone’s niece the outlook appears good, seeing as Simone had endeavored to send her kin out of town before it gets turned into rubble.

Jack compels the physician to get Simone conscious and quick. Alas, once she comes to, she shows no sign of giving her mother up — no matter how badly Jack grinds her severed pinky. She believes in her mum!

Jack and Kate get a bead on the grunt Margot sent to finish off Simone, but he’s killed by bobbies before he can cough up any intel. Besides, Margot’s not playing games — she directs Liam to target the hospital itself with the next drone missile! Jack (lugging wonky Simone) and Kate flee the building just before the strike and hustle into a car which then, in a breathless chase sequence, becomes a moving target for drone pilot Liam.

Liam’s next shot misses when Jack jackrabbits the car forward. Then, as Jack “borrows” a stranger’s SUV, weaves it in and out of traffic and steers it up an alley, Liam’s next missile detonates the brick wall juuuuust beside them. Liam takes a minute to lower the drone’s altitude and get a truer, can’t-miss shot with his final payload… but Jack uses a bridge as cover, empties the SUV and then sends it unmanned back onto the street — where the drone smacks it dead-on.

Margot, however, soon enough realizes that she’s been duped, that daughter Simone is still alive. But… after briefly wringing her hands, her countenance defeated, things look up for Margot when President Heller Skypes in, to see if she’ll in fact uphold her end of the deal and call off all of the drones, if he turns himself in as requested.

RELATED | Has 24‘s Kate Morgan Established Herself as the Female Jack Bauer?

* When Navarro is warned by his mysterious caller (sigh, it’s just Open Cell boss Adrian Cross) that the truth about the leaks to China will be revealed if Jordan Reed keeps digging, the CIA station chief sends his hipster analyst into the field for a “drop.” At the location, Reed is shot at, tumbling into the water — though later we see he survived.

* After Heller chews out the British PM for getting MI5 mixed up in Bauer’s op, he realizes that his Alzheimer’s secret is making rounds. As such, Heller tells Mark and Audrey that once this crisis is over, he plans to step down — though based on his aforementioned chat with Margot and his mysterious request to see Jack ASAP, it appears POTUS has an unusual “resignation” plan in mind.

What did you think of the seventh of 24: LAD‘s 12 hours? Anyone else finding the Prime Minister and POTUS, and activity in general amidst their staffs, to be too quiet in the lead-up to an imminent terror attack?