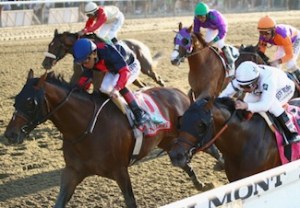 NBC’s Saturday-evening broadcast of the 146th Belmont Stakes — in which Tonalist (and others) thwarted California Chrome’s Triple Crown bid —  averaged 20.6 million total viewers, the second-largest audience ever for the event (trailing only Smarty Jones’ Triple Crown bid in 2004, which drew 21.9 mil).

This year’s running was up 57 percent from the last time a horse eyed Triple Crown honors (Big Brown in 2008), and it stands as the most watched weekend sports event since the Feb. 16 Sochi Olympics.

Leading out of the Belmont Stakes, Game 2 of the Stanley Cup Finals scored 6.4 million viewers, the largest audience on record/since at least 1994 for a Game 2. The Kings’ second win over the Rangers was up 60 percent from last year’s Game 2 telecast (on NBCSN) and improved upon NBC proper’s most recent Game 2 by 121 percent.