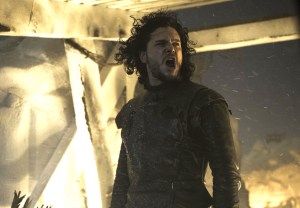 Warning: Spoilers ahead. If you haven’t watched Sunday’s Game of Thrones, bookmark this page and come back after you’ve survived the night at The Wall.

The biggest battle Game of Thrones has staged since Blackwater unfurled in all its bloody glory Sunday night and, true to the HBO drama’s tradition, the fight ended with a major character — Ygritte — going gently into that great night.

In separate interviews, TVLine caught up with Kit Harington and Rose Leslie to discuss the redhead’s missed shot, her bittersweet end in Jon Snow’s arms and how Ned Stark’s bastard will go on now that the wildling woman’s spark has been snuffed for good.

RELATED | Game of Thrones Recap: All in all, You’re Just Another Crow on the Wall

TVLINE | Everything he’s been warning his brothers about has come to pass – does he derive any satisfaction from the fact that he’s been right this whole time?
HARINGTON | I don’t think there’s time for satisfaction within him, and I don’t think Jon’s that person. He’s very practical. When he sees the greatest battle the north has ever seen, when he sees the army approaching, it’s everyone to their action stations. I don’t think he has any satisfaction in it. He’s just terrified. They all are. That was important – there’s no heroism in this episode. It’s not about heroics. It’s just about doing the job.

TVLINE | Jon’s natural leadership comes to the fore. Is this a role he likes? Is it something he feels he’s good at?
HARINGTON | I think it’s that old quote that some men are born great, some achieve greatness, some have greatness thrust upon them. I think Jon very much has greatness thrust upon him. He’s always been a reluctant leader in a lot of ways; he just has to do his job. I think he’s ambitious. I think he steps up when he has to step up. But again, for me, it was never about proving he’s right or wanting to lead people. He’s always been that person that just has to. That’s what I like about him: He’s not vying for power. He just has to take it, really.

TVLINE | Jon and Sam have that talk on top of the wall – and Jon has trouble voicing what it’s like to be in love.
HARINGTON | Yeah, he’s emotionally not great with words. He’s never been able to put how he feels into words, throughout the whole Game of Thrones. The scene at the top was a really fun one for me and John Bradley to play, because Samwell is good at speaking how he feels and he’s always trying to get Jon to open up. He’s pretty much the only person Jon will open up to. He says, “What was she like?” and Jon says, “She had red hair.” [Laughs] He doesn’t know how to respond to how he feels and he says the line, “I’m not a bloody poet.” And that’s who he is. He’s not one of these people in King’s Landing who talks about everything endlessly. He’s a man of action, and that’s been the really interesting thing to play about him, trying to show the audience he thinks and feels about Ygritte, but he doesn’t speak about her. TVLINE | Ygritte talks about how she wants to take Jon down herself  — “The crow is mine” – but we don’t really know if she would’ve let that arrow fly. Thoughts on that?
HARINGTON | Personally, I can’t speak for Rose or Ygritte, we didn’t ever talk about that, about what would happen if the scene ran just a little longer, but I don’t think she would have. I don’t think she could. I don’t know what would’ve happened if she didn’t die. I think they would’ve gone their separate ways, actually. If the scene played longer, I think they’d walk away from each other. They’d let each other live.
LESLIE | After all that pent-up rage and anger and throughout the season telling anyone who would listen that she is going to… make him hurt as he has made her, because she is a scorned woman and she wants to make sure that she gets her own back. She is truthfully unaware and completely oblivious of just how much she truly loves Jon Snow. And then seeing him again just knocks the wind right out of her. I don’t think she would’ve killed him. I don’t think she could’ve killed him.

TVLINE | Did you rehearse Ygritte’s death scene very much?
HARINGTON | No. We didn’t even go through lines together. We didn’t even talk about it, really. We didn’t really want to discuss it. We just wanted to play it on the day. In fact, we tried not to see each other on set that day. We just wanted to go through that bit together, because we’ve had such a wonderful journey together. We’ve enjoyed it so much.
LESLIE | Production had been incredibly thoughtful. They had left that scene, where I die in Jon Snow’s arms, until my last day  Oh gosh, I was a little baby, Kim. I really was. I blubbered like a little girl when we were finally done, because I was so incredibly touched.

TVLINE | Do you think Jon has it in him to love anyone that way again?
HARINGTON | In the sense of true love, yeah, I think he won’t love anyone else quite the same now. He may encounter other people, he may have sexual interaction with other people, who knows?

TVLINE | On this show? I don’t think that’ll happen to anyone ever again.
HARINGTON | [Laughs] I think he hardens quite considerably after she dies. I don’t know that he has it in him to love anyone like he loves her.

TVLINE | Coming out of the first night of battle, when Ygritte has died and so have many of Jon’s friends, did you play it that he was galvanized by what had happened? Beat-down? What is his mindframe?
HARINGTON | At the end of [Episode] 9, and I spoke to [director] Alex Graves at the beginning of Episode 10, he’s a dead man walking. Whatever emotion he did have is so distorted by what he feels he has to do at the end of Episode 9. I think he doesn’t expect to live. The thing about Jon is, every season, he’s walking the green mile to his death sentence, yet he keeps surviving. He’s used to it by this point, but this is such a low point for him. He’s so broken by everything that has happened in Episode 9 that I really didn’t think of emotions with it, really.

TVLINE | I’ll miss Ygritte. She was one of the few sexually liberated women on this show.
LESLIE | It was rather liberating to have that mentality and to know that she, as a woman, is incredibly confident and dominant, as well, in regards to other women in the show. Ygritte was such a pleasure to play.

TVLINE | And I imagine not having to wear corsets is also a nice thing.
LESLIE | Oh God, it’s so nice. I had my lovely furs to keep me warm in Iceland. My costume was just amazing. When we were shooting in -18 degrees, I was incredibly happy that I wasn’t wearing a corset.