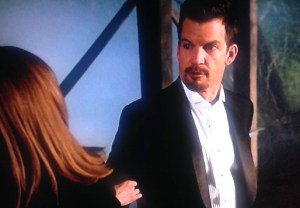 This week’s installment of Devious Maids revealed that the suspicious death of the first wife of Mark Deklin’s suave, slightly scary Nicholas Deering was quite possibly the lesser of his character’s evils.

Indeed, while we learned that Nicholas’ wife Dahlia tumbled to her death 15 years ago thanks to a push from his housekeeper/her lover Opal (Joanna Adler), it turned out that Opal was holding on to even more scandalous intel.

Indeed, as Nicholas threatened to dial 9-1-1 and report Opal’s very bad deed, the devious maid made a threat of her own: Put down his phone, and “I won’t tell your friends and neighbors you’re a murderer.” And thus, Nicholas played his part in convincing the police that Dahlia had committed suicide.

PHOTOS | Quotes of the Week from Fargo, Silicon Valley, Beauty and the Beast, Wendy Williams, Devious Maids, OITNB and More!

Making things even twistier? We got the crazy flashback just as Nicholas exchanged vows with our plucky protagonist Marisol (Ana Ortiz).

TVLine caught up with Deklin to dish whether the Nicholas-Marisol relationship has any chance of survival and just how, er, devious things might get over the course of the show’s final five Season 2 installments.

TVLINE | How much did you know about Nicholas’ backstory when you got cast? Did you know there was a second murder somewhere in his past?
I knew precious little coming in. I knew he wasn’t just some nice guy who was marrying Marisol. I knew that he was a guy with a dark past who was trying to hide that past and get on with his life. We were already shooting [Episode 2] when I finally found out what the backstory was — the horrible thing that he did.

TVLINE | How have you approached playing Nicholas, knowing there’s a murderous back story in the mix?
My approach was a play of opposites, which is always interesting to me. I’m not presuming to compare myself to Bryan Cranston, but Breaking Bad was an interesting template for me. Because here’s a guy who basically is a good guy, he’s got this internal tug of war as he ‘breaks bad’. So that’s how I decided to approach the character. Nicholas is not an evil, malicious person. This is someone who — through things that were out of his control — and also through bad choices he made in response to that, he found himself in this pit of “Oh my God, I’ve become a horrible person. I have done horrible things.” And he has enough of a conscience about it to say “I can’t be forgiven for this. I don’t deserve to be a part of humanity.”

TVLINE | Does he feel this way in the present day — even after meeting Marisol?
Well, for 15 years, he shuts himself off from human contact. He’s in his mansion for 15 years, because he doesn’t feel he deserves to be a part of the human race. An unexpectedly, to him — he happens to love books and he’s in his favorite book store and this woman comes up and starts talking to him. They kind of hit it off, and he’s not looking to flirt with her or anything. Just, they start hanging out, and next thing you know, they fall in love. And that’s Marisol. And in spite of himself, he’s fallen in love, truly, truly in love. And he wants to, in a sense, ‘break good’. He wants to be a good husband to her. He’s not cheating. There’s none of that. In the present moment, he’s a good guy. But those skeletons keep sticking their boney fingers up out of the dirt.

TVLINE | If he truly loves Marisol, doesn’t he owe it to her — whatever this second murder is — to be honest?
At some point, he’s obviously going to have to confront that. It’s going to bite him in the ass. But I think if he thought that she could forgive him, he would totally come clean. He wants to confess to her. But he’s so terrified that what he’s done is so unforgiveable, that she’ll despise him, and he can’t stand the thought of this woman he loves despising him.

TVLINE | And you’re only talking about the murder that Opal discussed at the end of this week’s episode — not the killing of Dahlia that he helped to cover up?
I’m talking exclusively about the older secret – the one we haven’t learned yet. Up until this point in the season, the obvious conjecture has been ‘Oh Nick killed his first wife’.

TVLINE | Opal obviously knows all of Nicholas’ secrets. Should she be afraid of him?
Yes. One of the dynamics that Jo Adler (Opal) and I tried to explore is “What would that relationship be?” It’s a detente. You know, it’s an arms race. It’s US and Russia saying, “I have as many missiles as you.” We’re both scared of each other. But at the same time, we’re both like, “I’ve got something on you too, and we can mutually destroy each other.” But when you’re living together for fifteen years, do you find little moments of peace with one another, within that? One of the things we imagined was Nick and Opal and [her son] Ethan living in this crazy dynamic, on a day-to-day basis. They probably have pleasant little routines. They found a way to just kind of co-exist.

TVLINE | Fifteen years is a very long time for a pact like that, too.
One of the journeys I tried to find with Nick is, when we first meet him, we all know Opal’s creepy. But Nick was semi-creepy as well. Here’s a guy who’s been a recluse for fifteen years. He’s been living with this crazy woman. But as the season’s gone on, I’ve tried to find ways in which Nick is shaking that off. And he’s becoming less and less creepy and he’s actually becoming more and more of a human being. Whether he succeeds or not, whether he ultimately is doomed, I do want it to be a journey that’s [reminiscent of] Darth Vader — a person who’s lost his soul, perhaps finding a way to rediscover that soul. Even if he’s destroyed in the end. That’s not a spoiler. I’m just saying…

TVLINE | So we can proceed with the rest of the season knowing there’s no ulterior motive for Nicholas wanting to get married to Marisol?
No. None at all. The only lies he’s telling Marisol involve any time the past starts to rear it’s head. But the problem with that is, ultimately, the relationship can’t succeed on lies. At some point, he’s going to have to come clean to her. And it’s either going to save the relationship or destroy it.

TVLINE | Was Nicholas’ thought process regarding the wedding that, “I might die while I’m under anesthesia, and I really want to make sure that we’re married, in case God forbid something happen to me”?
With a winky soap opera like this, it would be fun to let people be afraid that Nicholas has an ulterior motive. But no, I don’t think it’s a spoiler for me to say, I think Nick’s two reasons for wanting to marry Marisol are, “I’m probably not going to come out of this [surgery].” He just wants the peace in his heart, of knowing, “I have you. For this one moment I have this love. I have possession of it and it feels so good in my heart.” And second, on a practical level, if he dies, he wants her to get his fortune.

TVLINE | And Nicholas’ angry, jealous side we saw a few episodes back, when Marisol’s book editor had a crush on her…
That was a bit of a red herring: “Nicholas is angry and jealous, so maybe he killed his first wife.”

TVLINE | So we leave off with Nicholas in the hospital, about to have major surgery. Does he know it was Opal who ran him down?
She’s on his list of suspects. When we originally shot that scene [of Nicholas being hit by a car], we didn’t see who did it. We added the moment later, with Opal behind the wheel. I mean, she’d just said in the scene prior, “[Ethan] won’t get his money ’til you’re dead.”

TVLINE | Is Nicholas committed to taking care of Ethan, no matter what happens?
We didn’t see it on camera, but I think we can assume Nicholas has said to Marisol, “I want you to have my $800 billion or whatever — except I promised this money to Ethan.” This kid grew up in his house. I think he does see Ethan as the son he never had, and he has to be carrying the guilt of this boy having seen Dalia’s fall. When we shot that flashback scene, and Nick yells, “Ethan, go back the car!” I thought about my own kids. It was a protective gesture, like yelling, “Stay away from traffic!” He was trying to say, “Oh my God, Opal, this kid should not be seeing this!”

TVLINE | OK, so set up the rest of the season. Marisol spent all of Season 1 undercover as a maid to get to the truth of her son’s innocence. She clearly likes to snoop. How far will she go in finding Nicholas’ truth?
Nicholas, because his defences are down in the hospital and he’s on medication, he might not be as careful as he normally would be. There might be a moment where he gets sloppy, and that might make Marisol a little suspicious.

TVLINE | And can we assume that the alleged Murder No. 2 is Nicholas’ darkest secret?
There are still five episodes left. There is still time for a few curveballs. But the pace of the downward spiral, the juggernaut of Nicholas’ story, let’s just say we’ll have a little fun for the next couple of episodes, and then it’ll go hurtling forward to the finale.