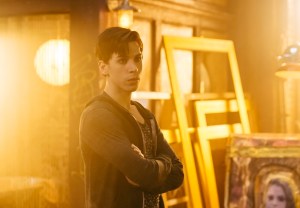 Oh boy, is there anything Tatiana Maslany can’t do?

That’s the question of the night after Saturday’s Orphan Black, in which Sarah and Felix made a mysterious, yet familiar addition to their gang. But this introduction came with a twist: The latest member of Clone Club is a he! And as Maslany took on her newest challenge, playing transgender clone Tony, the answer to the above question was a resounding, “Nope!”

TONY THE TIGER | You know it’s going to be a crazy episode when two minutes in, you’re already yelling, “Oh, my God! What?!” And this hour totally is, throwing you into the action with Tony and his friend Sammy, who’s been shot. But whatever to his wound, is that Tatiana Maslany with facial hair?! Needless to say, it took me a second to wrap my brain about what was going on, especially with Maslany’s voice so drastically different.

Sammy implores Tony to find Beth Childs. Since Beth is dead, Art takes Tony’s call and then enlists Felix’s help. After the initial bewilderment at discovering a transgender clone – “Holy Tilda Swinton,” Felix exclaims – they try to figure out what Tony knows about his origins. He doesn’t recognize the secret passcode when Felix recites, “Just one. I’m a few, no family, too. Who am I?” Tony’s reply: “Pretty gay by the looks of this place.” All he knows is that Beth said that they might be related and that Sammy had a message for her, which he’s not spilling until someone clues him into what’s going on.

Tony struts around Felix’s place, stripping down for a bath, needling Felix at every turn. “I know your game, Tony,” says Felix. “Pushing buttons. Testing boundaries. … What you’re doing here is more complicated than sex or gender.” Then Tony plants a kiss on Felix – after he discovers a painting of Sarah, interestingly enough. It’s kind of weird – just moments earlier, Felix was commenting how much Tony was like his sister! – so Fee pulls away with a quiet, “Fluidity doesn’t shock me.”

Tony pulls out the painting and demands to know the truth, but Felix insists it’s not his place to tell him. Just as Tony is about to ditch the loft, Sarah arrives and the two size each other up. Tony is surprisingly nonchalant and chill about the clone revelation. He already did the identity crisis thing, so his response is, “Look at us, we’re hot. Damn, girl.” That makes Sarah smile, big time. The new guy is A-OK by her.

Now that everything is out in the open, Tony reveals Sammy’s message: “Tell Beth keep the faith. Paul is like me. He’s on it. He’s a ghost.” (It should be noted that Paul is completely MIA this week, and Rachel is not happy about it. Her voicemail to him: “Paul, your absence is inconvenient, and your silence is irksome.”) Is Sammy a monitor, too? Does Dyad have dirt on him? He’s ex-military, so maybe he was caught up in whatever happened in Afghanistan, as well?

Looking at Felix’s paintings, Tony thinks he could “get along with dreadlocks, but that one with the soccer ball looks like a douche.” Felix comes to Alison’s defense, calling her a “functional alcoholic” and “not that bad.” Alas, Tony won’t get a chance to meet his other sisters. Felix sends him off, with a clone phone, to catch a bus to get far away from all of this. Despite everything, Felix knows Tony is going to be OK. Somehow, these two have bonded. (But Felix and Alison FTW, always.) Tony leaves with a quick peck on the lips and a cheeky, “Later, sister kisser.” COSIMA | She reveals to Scott that she’s their sick test subject. “It’s a honor, Cosima. An honor to be working with you,” he replies. Meanwhile, lovers Delphine and Cosima make peace (with an asterisk) and get high. “Je t’aime,” Delphine confesses. As lovely as it is, it’s not enough. “It’s all of us,” notes Cosima. “You have to love all of us. *Because if you betray us again, I have enough dirt on you to destroy your career. And I love you, too.” When Duncan finally comes in to Dyad to meet Cosima, she starts coughing and seizing. Meanwhile, back as Mrs. S’ house, Kira takes out the book Duncan gave her, which is filled with scientific scrambles and formulas. Is the cure actually in Kira’s hands?

ALISON | Her first day back at home from rehab is a messy one: Alison finds Donnie in bed, little bottles surrounding him. These two are a match made in drunk, killer heaven. Donnie tries to sneak out in the middle of the night, but Alison catches him and refuses to let him give up on their marriage. “No, we are not there yet,” she exclaims. “We have a whole mountain to climb. We’re not even at base camp yet! … Don’t you love me anymore? Did you ever love me?” she asks quietly. It’s actually really nice to see that for all her verbal and physical bashing of Donnie, there’s a part of Alison that’s still invested in their love. After she reveals what happened with Aynsley, Donnie makes his own confession. “I’m pretty sure he crapped himself,” he says, opening up the car trunk where Leekie is stashed.  “This is not at all well wrapped,” Alison remarks disapprovingly, busting out her crafty side. “I’m going to make a new liner.” And then she’s fully back to thinking Donnie is an idiot because he used her gun and put it back in her locker. Oh, come on, Donnie!

RACHEL | Delphine now reports to the proclone, who claims Leekie suffered a fatal heart attack in the private jet. Rachel sends Delphine to convince Sarah to bring Duncan into the Dyad immediately. The cure to Cosima’s illness lies in his synthetic sequences, but they’re running out of time. Duncan reassures Sarah that he can really cure Cosima, as immodest as it is to boast, so off to the Dyad he goes. “Don’t worry, I’m nobody’s pawn,” he tells Kira, handing her that book. (Is it part of a plan to not let Dyad get all the science?) His second meeting with Rachel goes much differently than their first reunion. She’s got her walls up and wants to know why the trampy, unmonitored clone could reproduce. That ability may be envious to the others, but Sarah is actually a failure. The clones are barren by design, Duncan reveals. “I suppose you couldn’t have created a reproducing prototype, could you? That would be irresponsible, which is unforgivable,” says Rachel as her response is intercut with scenes of her trashing her office and crying. I’ll confess: I found it kind of odd and jarring. After losing her parents and Leekie, is this her desperation for a family coming out? What do you make of the meltdown?

Orphan Black fans, what did you think of Tony? Wasn’t it lovely how his introduction actually gave us a lot of great Felix scenes? They’re not really going to kill Cosima, right?! And can we agree that this funny/sweet Felix and Sarah exchange was the best of the episode: “He’s got some of your worst qualities.” “You’re the very best of us.”