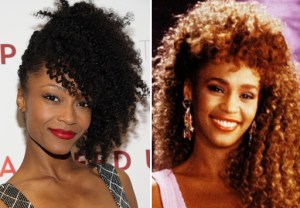 Yaya DaCosta has landed the greatest role of all, playing Whitney Houston in Lifetime’s upcoming biopic of the late star, TVLine has learned exclusively.

The TV-movie will chronicle Houston’s volatile relationship with singer-songwriter Bobby Brown during her meteoric rise to musical superstardom.

Since making her television debut in Cycle 3 of America’s Next Top Model, DaCosta has gone on to score recurring roles on shows including All My Children, Ugly Betty and House. She’s also had big-screen success, most recently coming off a role in Lee Daniels’ The Butler.

Angela Bassett (American Horror Story) will direct the yet-untitled biopic, which is aiming for a 2015 release.

Thoughts on DaCosta’s casting? Suggestions for actors to play the key people in Houston’s life? Drop us a comment and let us know.