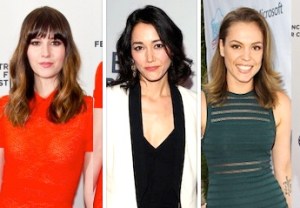 24 actress Agnes Bruckner and two others have been tapped for roles in  The Returned, A&E’s adaptation of the French series Les Revenants, our sister site Deadline reports.

Bruckner is slated to play the sheriff’s chief deputy on the 10-episode drama, which focuses on a small town turned upside down when several local people who have long been presumed dead suddenly reappear.

The actress will be joined by Sandrine Holt (House of Cards) and Mary Elizabeth Winstead (Smashed) on the series. Holt will play Julie, a compassionate doctor who is struggling in her personal life, and Winstead will play Rowan, who has had a difficult time coping with her musician boyfriend’s death.

Suburgatory‘s Jeremy Sisto also recently joined the cast, as did Arrow‘s Kevin Alejandro, Once Upon a Time in Wonderland‘s Sophie Lowe and Lost‘s Mark Pellegrino.