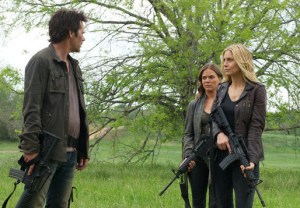 Can a passionate faction of Revolution fans get the lights turned back on? (Should they?)

Soon after NBC dropped the axe on the post-apocaltypic drama, the “Relocate Revolution” effort started up, aiming to drum up enough support for the series that someone might offer Miles, Rachel, Charlie et al a new home.

Alas, not every admirable show is always ripe for resurrection. Genre-TV fans need to pick and choose their fights, and this one might be a losing cause, as TVLine Editor-at-Large Matt Mitovich and West Coast Editor Vlada Gelman discuss below.

So, this “Relocate Revolution” movement is nearing 40,000 signatures. As someone who probably paid 33 percent more attention to Season 2 than I did — we both endeavored to juggle this show with Arrow! — is Revolution screaming to be salvaged?

Storytelling-wise, I did not feel a sense of urgency in the second half of the season. Although the stakes were high for the characters, the plots seemed to be moving along as slowly as travel in the post-blackout world.

When you say “plots,” do you mean “gunfights”? Because pretty much every time I tuned in, one exchange of bullets or another seemed to be at hand. Even the Season 2 finale — I tuned in a few minutes late and there’s some endless shootout underway, unclear who’s siding with who…. I guess I feel bait-and-switched, ultimately. I was sold on a series about this big blue marble called Earth losing all its power and the greatly mysterious origin of that inexplicable anomaly, yet by Season 2 all that arc left behind was… nanos.

Yes! I liked the darker world building that they did at the start of the season, showing us the culture/entertainment of the post-blackout world — David Schwimmer is the lone surviving Friend! — but I definitely started to miss the simple premise as the season went along. And don’t get me started on the nanos who overstayed their welcome. It’s so hard to fear/care about a villain that is all-powerful, yet oddly passive.

I agree about the world building — give me makeshift casinos, show me what the new currency is…. One of the most fun things Fringe did was make walnuts-of-the-dystopian future worth their weight in gold! I feel like Revolution made the same mistake as Heroes: It gave us what we wanted too soon. With Heroes, it was the epic — sorry, “epic” — showdown between the heroes and Sylar. On Revolution, it was getting the lights back on. I could have easily entertained another half-season inching toward solving that mystery. But at the end of the day, this series was about re-staging a revolutionary war. Yet talk about underwhelming villains! I love Steven Culp (who played Truman), but he doesn’t put the fear of God into me. And all I remember about Evil POTUS is his uncanny resemblance to George W. Bush. If this was about “us against them,” I never felt a great, terrifying sense of who “them” was. ♦ Now, turning specifically to what Season 3 would have looked like: Did that end-of-season tag leave you enthralled, or not so much?

Like so much of this season, I found it way too passive. A bunch of zombie-like people walking towards a clown sign isn’t exactly an action-packed cliffhanger. And it meant more nano, which… no thanks!

Exactly. When I saw that the big cliffy was nano-centric, I was like, “Mmm, yeah. I’m good with just two seasons.” But what about character dynamics left unexplored? Is there any relationship deserving of more story, if there was a Season 3?

How about every relationship? Aside from Miles and Monroe, who were at least getting along in the finale, we saw no substantial progress or closure for Miles/Rachel. There’s still plenty to mine with Rachel and Monroe, and Charlie/Connor. And of course, there’s those Charlie/Monroe vibes… Were they real or just a figment of ‘shippers’ imaginations?

Right? I know that Charlie/Monroe made some people fidget in their seats, but a bold, “age-inappropriate” move like that could have served to underscore how desperate times make for strange bedfellows. Because I can assure you, in a post-apocalyptic society where people are happy just to be alive, you’re gonna git with who you wanna git with. “Charloe” could have been noisy. And Rachel/Miles, we know for a fact that they held back on pulling the trigger with those two at least once. Gosh, Neville and his sometimes-dead wife may have been the swoon-worthiest sweethearts of the bunch! ♦ In closing, do we think Revolution fans would be prudent to brace for the worst? Because these actors are going to start landing new gigs and soon, I am sure, and talent availability is one of the biggest of many hurdles for shows being “plucked from the ashes.”

I don’t even think the Charlie/Monroe age difference was that big of a hurdle. It was more their history — he was responsible for destroying her family, killing her brother, etcetera — but hate/love stories make great TV. It’s a shame they didn’t at least try to do something there. But here’s the harsh truth: 40,000 signatures does not equal ratings.

Yeah, there was a meme being tweeted about the Season 2 premiere ratings, but as I told one follower, “TV is about, ‘What have you done for me lately?” — and by the finale those numbers had fallen 40 percent. Revolution is not a cheap show. It’s got some very good, tried-and-true actors, a tremendous amount of location shooting, pyrotechnics and… fireflies. Syfy couldn’t begin to afford this show. Mayyyybe TNT could look in its general direction, given their new slant toward genre fare. But even if I’m a Revolution diehard, I’m prepared for the lights to stay off.