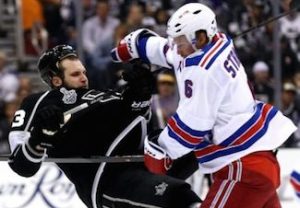 NBC’s broadcast of the Stanley Cup Finals‘ Game 1 between the Los Angeles Kings and New York Rangers couldn’t measure up to last year’s triple-OT opening face-off between the Blackhawks and Bruins.

Drawing 4.5 million total viewers and a 1.7 demo rating (per fast nationals that are certainly subject to change), the Kings’ single-OT win was down 30 percent from the prelim numbers for last year’s match-up (aka the most watched Game 1 in 16 years). But compared to 2012’s low-rated Kings-Devils opener (2.7 mil/1.0), the numbers were up sharply, and the game edged out So You Think You Can Dance for the nightly demo win.

* Fox’s So You Think You Can Dance (5 mil/1.5) ticked down just a tenth from its season opener.

RELATED | So You Think You Can Dance Recap: 5 Best Auditions from Chicago & L.A.