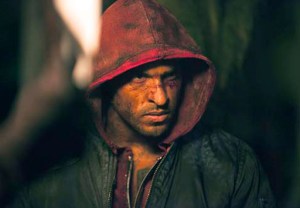 With only two episodes left in its freshman season, the tension between The 100 and the Grounders is at an all-time high — and it’s only going to get worse tonight (The CW, 9/8c).

TVLine spoke with Ricky Whittle, who plays Grounder-with-a-heart-of-gold Lincoln, about the impending clash of clans and the possibility of a happy ending for Octavia (aka The 100‘s own Romeo and Juliet).

TVLINE | Have you gotten a chance to watch the finale, yourself?
I actually just watched both parts, and the whole time I was like, “You can’t do that! You can’t show that!” I was like one of those caricatures screaming at the TV, and I knew what was coming. Hopefully, the audience’s reactions will be even better.

TVLINE | Give me some hints. What can we expect?
There are all those billboards you see for Game of Thrones that say “Winter is coming.” Well, I’m going to switch it up for The 100 and say “War is coming.” It’s going to be epic, the finale of all finales, and I’m so proud of it. From the actors to the lighting to the way it’s shot to the directing, you feel like you’re watching a movie — like Braveheart or Gladiator or something. If I hadn’t been watching it with other people, I would have teared up a little. And if you thought the season has been dark so far, the finale takes it to a whole new level.

TVLINE | And how does Lincoln fit into that darkness?
Well, the last time we left him, he was a little bit heartbroken. He understands that Octavia needs to be with her people, which just emphasizes the journey she’s been on. She started as a bratty teen who hated authority, and now we see she’s willing to give up running away with Lincoln to be with her people. She has several different layers and complexities. And Lincoln is the same.

TVLINE | It took some time for those layers to peel back. How will his softness affect him in the finale?
Absolutely. Lincoln started off intimidating and scary to the 100, and now he’s become this indigenous warrior who’s gone against his own people. He’s basically a man without a country, so you have to wonder: Will he continue to go against his own people? He’s now seen as a traitor, but he still doesn’t believe in what they’re doing. I can’t say too much, but he will definitely return to protect Octavia, for sure.

TVLINE | Glad to hear there’s hope for that relationship. How do you feel about Lincoln and Octavia?
Their relationship? Well, it’s terrible to play, because Marie is obviously terrible-looking. [Laughs] She’s incredible. She wowed me every day on set, and it’s so easy to work with her. And I think it shows on screen with their chemistry. People have really taken to their Romeo and Juliet story, which is essentially what it is. We’re two people from warring tribes forging a connection. I’m very much a lover of their romantic dynamic, I think it’s something worth investing in. The week Octavia left Lincoln, my Twitter feed went crazy, and that’s the reaction we want. So maybe they can work it out, after all.

What are your hopes for The 100‘s two-part finale? Drop a comment with your thoughts below.