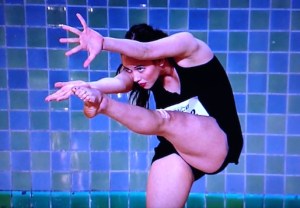 In an era of 24-7 Twitter cynicism and Facebook navel-gazing, sincerity is a dish that’s gone out of fashion. Try to serve it on the cold, metal platter of reality television, and it can be downright hard to swallow.

Which makes it all the more incredible that tonight’s installment of So You Think You Can Dance — focusing on auditions from Chicago and Los Angeles — found guest judge Christina Applegate with tears streaming down her cheeks, reassuring a teenage girl whose audition routine told the emotional story of overcoming an eating disorder that “it’s OK to be broken” and that she was “healing a lot of girls” through dance.

I know, I know, if you didn’t watch the episode, it probably all sounds a little too Iyanla Fix My Life. But in the spirit of embarrassing honesty, the routine in question moved me, too. Yes, it’s true: A contorted arm or an extended leg is worth 1,000 words.

Better still, tonight’s audition episode was so jam-packed with talent that even the presence of petulant millionaire Justin Bieber and his gesture-throwing choreographer couldn’t spoil my groove. (Side note: Why are those dance-crew battles so heavily edited?) The only problem I found was that the high ratio of great dancing made it next to impossible for me to narrow down my list to the episode’s five best auditions. But hey, that’s what I’ve promised in my headline, so here goes… 5. Dani Platz | Aforementioned teenager painted a picture of the psychological battle against her inner demons in a way that veered from haunting to uncomfortable to triumphant. I agreed with Christina — they should’ve sent her straight through to callbacks rather than asking for a round of choreography. Nevertheless, Dani cleared that added hurdle with no trouble, so here’s hoping she keeps getting stronger as the degree of difficulty rises.

4. Jana “Jaja” Vankova | I saw a lot more animation than krump in the Czech native’s routine, but her contained, mechanical moves left me pretty mesmerized despite not getting everything she’d promised. 3. Franchesca Bass | Teenager suffering from alopecia translated her startling look into a chilling routine about an isolated alien. As guest judge Fabrice Calmels noted, Franchesca’s movements were incredibly fast, but wickedly controlled at the same time. Anyone who can go from zero to a back arch in the blink of an eye bears watching at the Los Angeles callbacks. 2. Deise Mendonca (with partner Mauricio Vera) | Chilean ballerina proved an absolutely dominating presence from her first step right to her last. Deise’s technical excellence, combined with the kind of expressive face that’s made for high-def closeups, overshadowed her boyfriend/partner like Godzilla standing next to a common house ant.

1. Justine Lutz (pictured, above) | I spent maybe 10 uncomfortable seconds wondering if Justine’s Band-Aid was actually a flap of skin hanging from her knee — thank heavens it wasn’t! — but after that potential horror was dismissed, I found myself utterly moved by the contemporary dancer’s strong, atypical movement. There were a few seconds where I got “girl crawling out of the TV in Ringu” — but even then, I couldn’t look away. If I had to pick one dancer tonight who seems destined for the Top 10, it’s Justine.

What did you think of tonight’s SYTYCD Chicago and Los Angeles tryouts? Who were your favorite auditioners? Sound off in the comments, and for all my summer TV news, interviews and recaps, follow me on Twitter @MichaelSlezakTV!