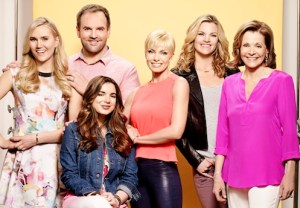 “You know, everything that’s meant to be, is, and what’s supposed to happen, does,” Jaime Pressly says, giving off some very zen vibes while explaining how she came to be the lead of TV Land’s newest comedy Jennifer Falls, which premieres Wednesday at 10:30/9:30c.

As the My Name Is Earl vet tells it, she got the script for the pilot, penned by series creator Matthew Carlson (Malcolm in the Middle)  – “I read it on my phone, I flipped out,” she recalls – and was in a meeting about it not long after, because everyone who needed to be present just happened to be in town that day. “Everything clicked.”

Sure enough, the cable comedy’s team felt the same way about Pressly, “and the next thing you know,” she says happily, “I was cast in the pilot.”

The actress’ laid-back attitude is markedly different from that of her titular character, a stressed-out career woman and single mom who in the first episode is called into her boss’ office to receive what she thinks is a promotion… but turns out to be a pink slip for anger issues.

With her income vanquished and her ego crushed, Jennifer must relocate herself and her teen daughter Gretchen (played by newcomer Dylan Gelula) to Jennifer’s childhood home, where they become roomies with Jennifer’s mom (Arrested Development‘s Jessica Walter) – “who’s a therapist who doesn’t listen to her, which is just infuriating in itself,” Pressly says.

As she’s “starting from scratch,” Jennifer slings drinks at a sports bar owned by her brother (Pressly’s Earl co-star/good pal Ethan Suplee) and tries to reconnect with old friends (Greek‘s Nora Kirkpatrick and ubiquitous TV guest star Missi Pyle), which made hiring the right mix of actors of the utmost importance.

“It’s very rare that you can put five strong women on a set and only one man and have them all get along,” Pressly says. “It was really important to me, when we were casting this, that I be able to be part of the casting process. Everybody in [the show] is either a family member or my best friend from childhood, so chemistry is really important.” As the series develops, the penniless Jennifer finds herself a little lost: How does one raise a teenager without the benefit of housekeeper or nanny?

“She actually has to be a full-time mother, and that mom guilt that she may have never really felt before, now she gets it, because she sees what her daughter’s going through because of her,” Pressly says. “It humbles her. She’s got to figure out how to suck it up, stay positive and move forward.”

Along those lines, Pressly – whose son, Dezi, is 7 – knew that she only wanted to take on another TV series if its schedule worked around her home life, not vice-versa. So when the series, originally conceived as a multi-camera format, switched to a single-camera one (which takes longer to shoot each episode), she made it clear that her home life wasn’t going to get short shrift.

TV Land eventually agreed to a Modern Family-style shoot, with three cameras going at all times and confessional-style interviews — and a “really great schedule,” she adds.

She adds: “The hardest thing in the world to do is to find balance for a working mother… This came along at the perfect time.”