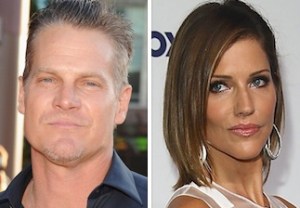 Brian Van Holt is switching from cabernet sauvignon to Tang, to helm a starship in the Syfy limited series Ascension.

Per Entertainment Weekly, the Cougar Town vet will play William Denninger, captain of the titular vessel, which was launched into space by the U.S. government in 1963 to populate a new world. The six-hour series picks up 50 years into the mission, as a mysterious murder causes those on board to wonder why they’re really floating around in a giant tin (penny) cannnnn.

As previously reported, Battlestar Galactica alum Tricia Helfer will play manipulative power broker Vionda Denninger — aka the captain’s wife, with whom he shares a difficult marriage.

Ascension is due to blast off during November sweeps.