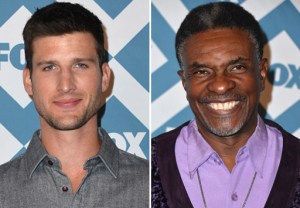 Eleven regulars have been assembled for DirecTV’s first original comedy series — or should we say they’ve been enlisted?

Parker Young and Keith David, both of whom starred in Fox’s cancelled military comedy, are among the cast of Things You Shouldn’t Say Past Midnight, according to The Hollywood Reporter. Young will play a 19-year-old college sophomore who pulls a prank on the dean of his school, played by David.

Ordered for 10 episodes, Midnight will begin airing later this year.

* The INSP cable network (find it here) will tribute the late Ann B. Davis with an Alice-centric Brady Bunch marathon starting Thursday at 5/4c. The episodes to be featured are “Alice Doesn’t Live Here Anymore,” “The Big Sprain,” “Alice’s September Song,” “Sergeant Emma,” “Goodbye, Alice, Hello” and “The Elopement.”

* Cartoon Network has renewed The Amazing World of Gumball for a fourth and fifth season. The Season 3 premiere airs Thursday.

* TBS has renewed King of the Nerds for a third season, per The Hollywood Reporter.