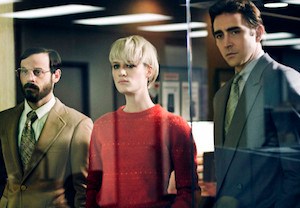 Is Halt and Catch Fire destined to go the way of the Apple Newton?

Sunday’s premiere of AMC’s ’80s-set computer drama drew a disappointing 1.2 million viewers and a 0.34 demo rating. As a point of comparison, the network’s Revolutionary War saga Turn opened to 2.1 million viewers in April. (It’s worth noting that AMC made Halt‘s premiere episode available in advance, on AMC.com and Tumblr.)

POLL | Halt and Catch Fire Premiere: What Grade Do You Give the Premiere?

Over on HBO, Game of Thrones delivered 7.2 million viewers, matching its series high, while Silicon Valley ended its rookie season with 1.7 million viewers, up slightly from the last original episode. Veep closed out the night with an on-par 1.1 million viewers.