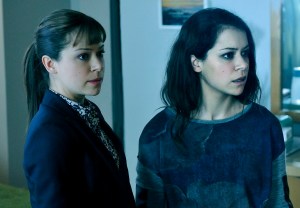 Clone Club, welcome to Orphan Black Season 2’s version of the potluck episode. Naturally, the zippy antics once again involve Alison and a case of mistaken identity as her rehab center hosts Family Day. Sadly, a hot glue gun is not involved this time, but there is lots of glitter — and a killer ending!

ALISON & SARAH | Our favorite rehab resident “unburdens” herself to Vic about sleeping with Aynsley’s husband. Encouraged by his supportive response, she adds: “And I killed her.” To Vic’s credit, he’s only momentarily sideswiped by the crazy confession. Then he calls Angie (ugh), and Alison overhears their conversation. Now that she knows Vic is snitching on her, it’s time to bring in reinforcements. “I can’t go to jail, Felix,” she says. “I don’t have the temperament. In the shower, if they touch me, I will cut them.” So it’s up to Sarah to come and clean up her “do-do,” as Alison puts it.

At first, Vic just wants to “atone” to Sarah for what he did, but then he tells her he wants her back. Everyone’s reaction is pretty much, “Seriously, dude?” “Don’t tell me that Nail Gun Ken is still in the picture,” Vic replies, to which Felix responds, “No, but you should see the new one.” Sorry, Vic, but if we’re ranking Sarah’s boy toys, you are very far down the totem pole. Then Vic starts to get woozy – Felix spiked his tea so he’d miss his meeting with Angie — finally passing out and falling head first into Alison’s table of glitter and feathers, giving him a “molested by elves” look.

Meanwhile, Alison’s sponsor comes knocking for her, so Sarah has to once again don a headband and play the role of her uptight “sis,” which gets really meta during a roleplaying exercise with Donnie. “And I’m being Alison being Donnie?” she asks, falling in and out of character during the bit. At one point, she even exclaims, “He’s the one who’s blocking her!” “Now who are you being?” Donnie asks, confused. To top off the shenanigans, Felix and Alison are lugging Vic’s body through the rehab center – he can’t be seen in her room because family tours are coming up – Angie is looking for Vic. They finally dump him in the front lobby, leaving everyone to assume he fell off the wagon. As Sarah and Alison are arguing in her room – how cool was the framing with both of their reflections in the mirror? – Donnie walks in to see the two side by side. Alison congratulates him on finding the runaway clone, but he’s seriously and genuinely clueless. He was recruited by a sociology professor into a study with no knowledge of what it was really going on. The spying and lies “ruined our family!” Alison yells. “And you’re so stupid, you don’t even know why!”

RACHEL & THE DYAD | Paul lies to Leekie about Sarah coming up empty in her search for Duncan, so maybe he’s not totally dark side now. The doc calls for a meeting with Marian (played by Chicago Fire‘s Michelle Forbes), who appears to be even higher up the Dyad food chain than Rachel. Leekie fills her in on the Sarah/Rachel/Duncan situation. “Out paths rarely cross anymore,” Marian says to him. “But when they do, it’s almost always because of Sarah Manning. We need to look at that.” That’s an elegantly put, not-so-thinly veiled threat, if I’ve ever heard one.

Mrs. S also meets with Leekie, offering up Duncan in exchange for him giving up on Kira, but what she’s really after is whether or not Rachel knows her father is alive. Through their conversation with Leekie, she pieces together that Rachel’s not aware. There’s no telling which way she’ll fall when she learns the truth about her parents, but Sarah doesn’t care, so Mrs. S stages a meeting between Duncan and Rachel, during which the proclone even sheds some tears. Later, Rachel confronts Leekie and reveals that the plan to get rid of him is in motion. “Don’t get into your car, don’t go home,” she offers him. “You might survive. It’s foolish to spare you. But you raised me. Nurture prevails.” As Leekie is running for his life on the street, Donnie pulls up – with a gun! – and forces the doc to get in the car. “You lied to me. It’s not right, all the secrets,” he exclaims. Leekie calls him a “turnip” — an apt description, if we’re being honest — and a footnote in the experiment. “I won’t participate anymore. I quit!” Donnie yells, slamming his gun against the steering wheel – and causing it to go off and shoot Leekie in the head! Typical Donnie. Can’t even quit without screwing up and accidentally killing his boss.

COSIMA | The science geek finds out that the stem cells they’ve been using to treat her came from Kira – Leekie procured the child’s tooth from the hospital – and she’s really mad at Delphine for keeping it secret. “You only have one way forward and this is it,” Delphine argues, noting that the tooth is a “finite source.” Poor Cosima has to call Sarah, who packs up Kira to take her to Dyad. Cal can’t understand why she’s taking Kira to the enemy. “She’s sick. Kira might be her only chance,” Sarah explains, while Cal pleads, “Don’t do this to our kid.” What Kira does to herself might be worse: She uses a piece of string to pull out her own tooth! Man, that kid… Before Sarah and Kira take off, Cal reminds his daughter that she can always call him, using the number they practiced. Can I have that number, too?

Orphan Black fans, were you shocked by Leekie’s accidental demise? What did you think of the rehab adventures? (Nice touch how Alison didn’t make Donnie a name tag, yes?) And why is Kira so darn special?!