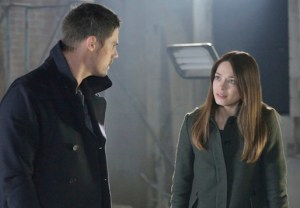 Beauty and the Beast fans wound up with a happy ending – for now, at least – when in the midst of a months-long hiatus that interrupted a tepidly rated Season 2, The CW renewed the series for the 2014-15 TV season.

With the sophomore run resuming Monday at 9/8c, TVLine invited titular beauty Kristin Kreuk to preview the aftermath of Vincent’s arrest for Kurt Windsor’s murder, tease the “dirty” tricks up Cat’s sleeve and ponder the plan for the shortened Season 3. Oh, and: disguises ahead!

RELATED | The CW’s Fall Schedule: The Originals on the Move, Flash Paired With Supernatural

TVLINE | The season is picking up right where we left off. How damning is the evidence against Vincent?
It’s rather damning. There doesn’t really look like there’s much of a way out for him or [Cat, Tess and JT], so they’re all in a panic. And clearly, because he is a beast with issues, keeping his temper in jail is not a great thing.

TVLINE | Is it almost conspicuous the volume of evidence against him and the timing of this?
Absolutely. And because of what there is, they have to come up with a crazy plan to be able to make it go away. for the first episode back says Catherine & Co. realize they have “a bigger enemy” to handle when they discover who turned Vincent in. Are you at liberty to confirm who this person is?
We don’t know by the end of this episode who the person is specifically, but we know that there is someone behind it all. It takes a little while for them to figure out the ins and outs of it, and in the arc of upcoming episodes there’s a bunch of new people that we meet that we realize are influencing things.

TVLINE | Is Cat going to have to play dirty to get Vincent out of this situation?
Absolutely. She’s going to do a lot of things that are against the law, and put her career on the line.

PHOTOS | Beauty and the Beast: Vincent’s Behind Bars — But Who Put Him There?

TVLINE | Meanwhile, what’s going on with her father?
Well, her father is still in jail. She doesn’t think very highly of him, clearly, but he does have a role to play in all of this. For a while, Catherine really thinks that he’s responsible for everything, then he ends up giving her some information about what’s actually going on.

TVLINE | Oh my God — they’re going to reconcile just in time for Father’s Day.
[Laughs] I don’t know if it will happen in time. Isn’t Father’s Day soon?

TVLINE | He’ll accept a slightly belated card, I am sure. Meanwhile, are we to assume that JT and Tess just are goin’ at it now?
Well, they have some relationship issues to work through, especially from Tess’ side. In this episode, they’re going to have a bit of a difficult dynamic, and it gets revealed accidentally to Catherine and Gabe that they had sex in a heated moment, which is rather funny. It’s really about them figuring out what they want.

TVLINE | I will assume this is one of those situations where JT is one of those geeky guys who’s surprisingly phenomenal, and Tess came away from it like, “Whoa.”
[Laughs] I don’t know if we’ll ever know that, but we could assume that it “goes well” for the two of them.

TVLINE | Would you say this next stretch of episodes is on par with the last couple before the break? Because those first episodes of the season kind of rubbed Beasties the wrong way. Yeah, you’ll see Catherine and Vincent working together, trying to figure stuff out. And we might even see more of Catherine’s family history that’s revealed. All of that, I think, will be more in line with what the fans gravitate toward. [As for Season 3] we don’t know yet because it’s still early, but what I think [exec producer] Brad [Kern] will want to do more of that in the 13 episodes that we do next season.

TVLINE | It appears that in the second episode back, Cat and Vincent will ally with the FBI. Could that be “the show” moving forward? The two of them working in concert with law enforcement?
That may be the direction we’re headed in. …

TVLINE | Because that’s a show I’d like to watch. She’s the brains, he’s the brawn….
I mean, who knows? Honestly, it’s early days yet, but I think that’s where we’re probably going to go.

TVLINE | Does Season 2 end with a cliffhanger?
It’s interesting, because we shot it before we knew what was going on with [renewal], so there’s both a cliffhanger and closure. Those two things both exist within the final episode. It’s a pretty exciting episode.

TVLINE | If the season finale had been the series finale, would fans have been screaming a bit?
Our fans, yes, because I don’t think they’ll be satisfied until Catherine and Vincent are happily married with children or something. [Laughs]

TVLINE | Obviously you love your job and having work, but were you admittedly surprised about the Season 3 pick-up, if only given the cold, hard numbers?
Having a slight understanding of how the network works, it made sense to me. I figured it wouldn’t be a full-season pick-up if we got picked up. But it was a nice surprise — we get to come back together again, and we all get along really well. I had a really nice, totally practical point of view. I had a really nice year working, so I think it’ll be good for us to come back and do 13.

TVLINE | Do you sense that Brad’s got a tight, focused plan for those 13?
Yeah. Because it’ll be Brad’s second season [with the show], he’s got a good sense of where he wants to go and what works and what doesn’t. That’ll help, and hopefully it’ll be a bit more steady. I feel like we’ve tried out a bunch of different things with the show, and there are so many wonderful things about it. I really hope that we find the right mix and it gels so that we get more of an audience — or at least really please and excite the audience that we do have and that is so passionate.

TVLINE | So what do you think — Season 3, Episode 13 is a big wedding and Catherine will be pregnant…? “I do! And I’m having our baby!”
[Laughs] We don’t know these things. I don’t know. And I don’t really want to.

TVLINE | Give me one last tease about what’s coming up….
There will be disguises. Oh, and period costumes.

TVLINE | Separately? I take it the disguises are not period costumes?
Yeah, separately.