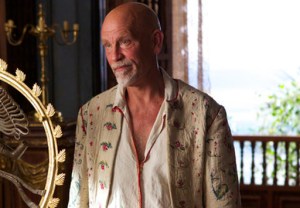 More than a mere pirate drama, NBC’s Crossbones — which premiered Friday — takes us inside the minds of history’s most devious swashbuckler and the one man cunning enough to bring him down.

It’s not long before Tom’s “surgeon” cover is blown — he’s a much better assassin than he is a fake doctor — but he quickly devises a Plan B and burns an all-important document known as “the cypher.” This leaves Tom as the only person capable of decoding the instructions for building the coveted chronometer, a device which would enable sailors to reckon longitude, thus putting an end to piracy. (Oh, you didn’t think this show would be complicated? Sorry to disappoint.)

This buys Tom quite a bit more time among the living, but when simply surviving no longer appears a viable course, Tom and his “monkey” pal Fletch (Next Caller‘s Chris Perfetti) return to Plan A, which has always been to kill Blackbeard. Of course, offing the pirate king in the pilot would make for a pretty short series, so the duo runs into a major snag during the execution of their plan.

Upon discovering that the Spanish are conspiring with pirates — and that he’ll need Blackbeard alive in order to discover what they’re up to — Tom is forced to double-back on the assassination, supplying Blackbeard with the antidote to the very poison he tricked him into consuming.

It’s anyone’s guess where Blackbeard and Tom’s relationship will evolve from here, but for now, we’re enjoying the pirate-era Emily Thorne/Victoria Grayson dynamic they’ve got going on.

Our question is: Will you stick around long enough to find out who comes out on top?

Rate the Crossbones premiere below, then drop a comment with your full review.