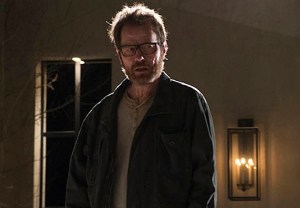 Throughout Breaking Bad‘s five-season run, drug kingpin Walter White got himself out of a lot of tight, seemingly hopeless situations.

But did he cheat death? Star Bryan Cranston says maybe.

While plugging his new action flick Godzilla on CNN Thursday, Cranston indulged host Ashleigh Banfield’s questions about whether Heisenberg might’ve lived through what — to most of the audience — seemed like his final moments at the end of the AMC series’ finale.

Though cancer sufferer/gunshot victim Walter fell to the ground as the police narrowed in on him, Cranston reluctantly acknowledged that there’s the tiniest of chances the chemistry-teacher-turned-meth-maker might’ve survived.

“You never saw a bag zip up or anything,” he says, smiling. “Never say never.”

Also in the interview, Cranston discusses playing The X-Files‘ Patrick Crump, a one-off role for which “I just happened to have the right hair” — and which first put him into contact with Vince Gilligan, his future Bad boss.

Do you think/hope Walter might’ve survived? Press PLAY on the video, then sound off in the comments!