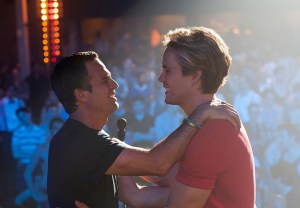 HBO’s The Normal Heart drew a solid 1.4 million viewers across two airings on Sunday night, the cabler announced on Tuesday.

The Ryan Murphy-helmed pic’s premiere at 9 pm averaged just under one million viewers, making it fifth in viewership among the 17 HBO Films that have debuted on the network since 2010.

* POTUS Barack Obama will make his first appearance on Live With Kelly and Michael this Friday, May 30.

* In honor of Gay Pride Month, Showtime Showcase will reair all the seasons of Queer as Folk and The L Word beginning in June.

* ABC Family has made the series premiere of its new drama Chasing Life available for free via its WATCH ABC Family app through Monday, June 9, and on demand starting June 3. The show, about an aspiring journalist (played by Unnatural History‘s Italia Ricci) who finds out she has terminal cancer, debuts June 10 at 9/8c on the network.