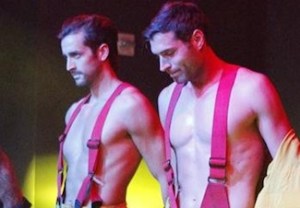 Even a bevy of male strippers couldnt keep The Bachelorette‘s numbers from limping on Monday night.

Drawing 5.7 million total viewers and a 1.4 demo rating, the dating show was down 20 and 30 percent from its aprés-DWTS season premiere, as well as down from its year-ago outing opening the night (6 mil/1.9).

RELATED | 24: Live Another Day Recap: Keeping Up With the Droneses

An American Ninja Warrior recap special opened NBC’s night with 3 mil and a 0.9. The competition series’ two-hour premiere then averaged 4.7 mil/1.5, dipping 6 percent and two tenths versus its previous opener.

TVLine values your input! Please share any feedback on our redesign in the Comments section of this other post.