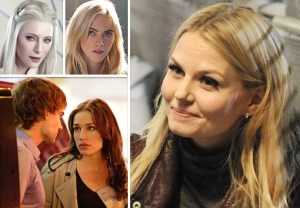 Does Once Upon a Time‘s Hook-up make sense? Is a Defiance duo in trouble? Which Covert agent is having “bad” sex? Which Major Crimes character has a secret? Read on for answers to those questions plus teases from other shows.

I am loving that Hook and Emma finally kissed in the Once Upon a Time finale! Any hints about how Emma now views him/their relationship? –Liz
I can’t speak for the fictional character of Emma, but Jennifer Morrison, at least, feels that the couple’s new closeness makes sense. “If you had said it to me when we first started the show, I never would have anticipated it — but the reality is that he’s a very kindred spirit,” the actress tells TVLine. “They’ve both been through similar things, they’re both survivors and they’ve both had to fight in order to literally just live. There’s also something in them where they’ll both go to great lengths to protect the people they care about — and sometimes they’ll do really bad things to do that, but they both have really good hearts, so I think they see a lot of themselves in each other.” Emma is also seeing impressive changes in the pirate. “This season in particular, because Hook has really fought for Emma to be true to herself and be the most powerful version of herself, he’s earned a tremendous amount of trust from her, and that’s what really makes it organic for Emma to feel vulnerable with him,” Morrison notes. “I know that in my own life, I have a strong reaction to people who empower me and say, ‘You should be yourself, even if it means making some mistakes.’ So the fact that he does that, and isn’t at all put off by that, makes it a good place to start a relationship.”

What secrets can you reveal about Season 2 of Defiance? –Sally
Jaime Murray says that because things pick back up following a time jump, “Whichever cliffhanger you left the characters in, they’ve had to deal with the repercussions of that, so they’re all in an extremely different position at the beginning of Season 2 (premiering June 19).” And you can be certain that includes Stahma and husband Datak, who when last we tuned in had clumsily killed an E-Rep biggie. “You already saw Stahma dealing with her own resentments of Datak to begin with,” the actress reminds, “so she’s pretty angry with him for his impulsive stupidity that changed their lives irrevocably.” Hmm, might Stahma thus be spending more time at the NeedWant…? Murray smiles: “She may be, actually!”

Do you have any scoop on Arrow and Amanda Waller? That last scene of the season finale got us really curious, and Season 3 is too far away. –Ana
I asked Stephen Amell how this new stretch of apparently Waller-centric flashbacks will inform the coming season, and the way he put it is this: “Oliver lost a lot of his humanity in those five years [away from Starling City], so as we see that continue to happen it in the flashbacks, we will see how much of his humanity he wants to get back in the present.”

I’d love to know what’s in store for Rusty on Major Crimes this season. Can you help me out? –Estee
I just screened the season premiere (airing June 9), and without revealing too much, the oft-troubled lad has a big secret he needs to share with someone — and for the time being at least, that someone will be a somewhat gobsmacked Provenza.

On Rizzoli & Isles, will Frost’s absence be addressed immediately in this new series of shows? –Bobbi
How the show will write in the tragic passing of cast member Lee Thompson Young is not addressed immediately-immediately in the Season 5 premiere (airing June 17), but then it sneaks up on you and all of a sudden you’ll be clamoring for Kleenex. The following episode then delves deeper into the sad, sad aftermath.

Got anything on what Pope is up to in Season 4 of Falling Skies? –JJ
I will go for the TNT Summer Series trifecta and tell you that when we first see Pope again, dude is on the wrong end of a flamethrower. But a little bit later, he’s kicking back, enjoying some Gilligan’s Island, when Hal shows up asking for a “favor.” Pope’s not big on favors, especially these days, so it won’t surprise you to know that the gents soon enough end up in a bit of a scuffle.

Anything to share on the new “mini” season of 24? –Greg
If you suspect that the latest drone strike has left Kate Morgan large and in charge at the CIA’s London command center — if only by process of “elimination” — you’d (seemingly) be right. “That would make sense, yes,” Yvonne Strahovski concurs, “but that storyline is going to take us down some quite unexpected avenues.”

Are there going to be any life-changing events for any of Gibbs’ team members during Season 12 of NCIS? –Marsha
I don’t know if the storyline surrounding this reveal will be “life-changing” per se, but show boss Gary Glasberg tells me he still is on track to put a face to the long-MIA Mrs. Gibbs No. 2 during Season 12 — as well as unveil another never-seen spouse. “I look forward to introducing [Gibbs’ second ex-wife], and I look forward to meeting Bishop’s husband,” he shares. And along those lines, “We’re already playing with some ideas that I think are going to be fun for people.”

On Covert Affairs, how has Annie going dark and now trying to come in from the cold changed the relationship between her and Auggie? –Shelby
All told, “It’s a bit of a reset” when Annie resurfaces after months off the grid, Christopher Gorham reveals. “Coming off of what happened to her, she kind of ‘needs a minute’…. Her big challenge this year is that she wants to keep her work life separate from her personal life. Auggie understands that and gives her the space she needs — but at the end of the day, he may end up giving her more space than she bargained for!”

We saw Calder go from potential bad guy to hero last season on Covert Affairs. What can we expect from “the Sheriff” this year? –Shelby
You can expect struggles on the personal and professional fronts. “We may see him mess up in his personal life,” Hil Harper hints. “He starts having sex, that’s for sure – but maybe sex with the wrong person!” Meanwhile at the CIA, Calder is still the interim boss, “but Joan wants her job back, so there’s a bit of a thing there that we’ve got to figure that out,” Harper previews. P.S. Speaking of Joan, know that Kari Matchett’s real-life tot will be playing Joan and Arthur’s new bundle of joy.

Got any Graceland scoop about Paige? –Hayley
If you’re familiar with Serinda Swan’s extracurricular endeavors, you can appreciate how much the following Season 2 storyline means to her. “Last season, I pitched to the writers a story on human trafficking, because that’s something that I’m very passionate about and I fight a lot on my own time — and they took it. We have a storyline on human trafficking going on,” she shares. “So I’m excited for Paige to bring that story into people’s homes in a way that raises questions.”

Hello, my name is Stephanie I’m trying to find out when is the new season of Twisted going to premiere?
There’s still no official word that there will be a second season – though the show is still listed on ABC Family’s press site, which has to mean a little something.

Do you know if Crossing Lines will be back? I really enjoyed the characters and hope to see more. –Laurie
Sources confirm what we all probably suspected: Though picked up for Season 2 over in France (the country that brought us Les Revenants aka The Returned!), Crossing Lines will not be back on NBC.