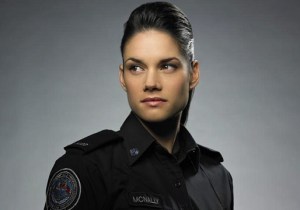 RELATED | Once Upon a Time Creators Talk Regina’s Blast from the Past, Confirm Season 4′s Frozen Twist

ABC has bumped up the premiere to June 19 at 9/8c, TVLine has confirmed.

The show was previously scheduled to return July 17 at 10 pm.

* Not only will a new episode of The Blacklist air after the Super Bowl on Feb. 1, but NBC on Monday confirmed that the episode will be a two-parter. The second part will air Feb. 5 when the drama makes its permanent move to Thursdays.

* Jane Krakowski (30 Rock) has joined the cast of the NBC comedy Unbreakable Kimmy Schmidt in a recurring role, our sister site Deadline is reporting. Krakowski will play a wealthy Upper West Side woman who hires Kimmy (Ellie Kemper) as a nanny.

* Former Smash co-stars Christian Borle and Megan Hilty will reunite in Lucky Duck, an animated movie premiering June 20 on Disney Junior. Borle will voice the titular character, who also happens to be a rubber ducky, while Hilty will voice an “extroverted” hippo toy named Flo.