Might a certain avid fanbase get its happy ending?

CBS has released photos from The Mentalist‘s Season 6 finale, airing May 18, and there’s much Jane, much Lisbon and much of them together. And zero Pike.

In the yet-to-be-renewed procedural’s finale, titled “Blue Bird,” a new lead in a cold case requires Lisbon to delay her plans to leave for Washington, D.C. with Agent Pike, offering Jane time to finally come to terms with his feelings for her and decide on a course of action.

I sense a bit of angst in a couple of the photos below — that is, when not distracted by Teresa’s wowzers dress. (Between this and Emma Swan’s red number, it’s been a good day.) And could that final slide be from the final scene of the season/possibly series…? UPDATED to add two new “splashy” photos.

If you like TVLine, you'll LOVE our email news alerts! Click here to subscribe.
The Mentalist Finale First Look: Will Jane and Lisbon Literally Ride Off Into the Sunset? 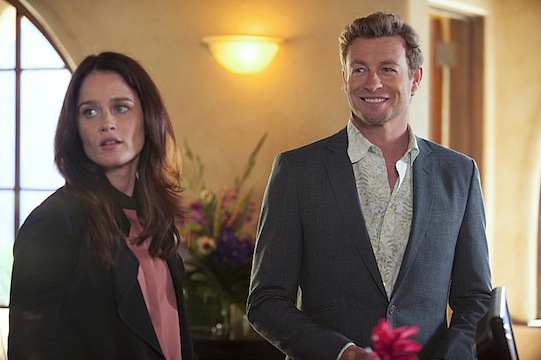