It is all hands — and bows — on deck as Arrow and Friends head into Season 2’s penultimate episode.

In the CW drama’s “Streets of Fire” episode (airing Wednesday at 8/7c), Oliver rallies his team as Slade’s Mirakuru army attacks the city, while Felicity gets an important call from S.T.A.R. Labs and Thea comes face-to-face with her father – Malcolm Merlyn (returning guest star John Barrowman).

In previewing the hour, executive producer Andrew Kreisberg told TVLine it has a 24-type feel, unspooling almost in real time “over the course of a very short span of time. Oliver actually starts the episode dressed as The Arrow and ends it dressed as The Arrow — and that’s kind of exciting for us, because we’ve never done anything like that.”

Add in the return of the presumed dead Dark Archer, and you get “a real roller coaster,” Kreisberg said.

If you like TVLine, you'll LOVE our email news alerts! Click here to subscribe.
Arrow First Look: Laurel With a Bow and More Photos From the 24-Style 'Streets of Fire' 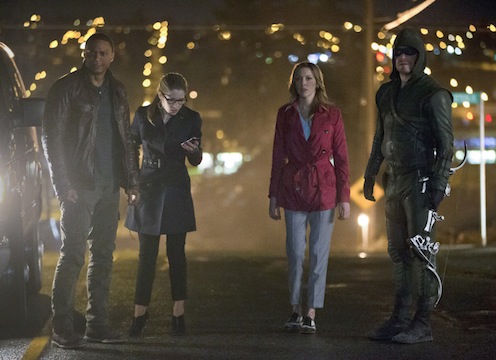