It is indeed “A Faire to Remember” next week on Warehouse 13 (Monday, 9/8c), and TVLine has a sneak peek at Pete and Steve grilling two alumni of another Syfy series.

VIDEO | In Syfy’s Dominion, a Legion of Angels From Heaven Raise Hell on Earth

In the third installment of W13‘s six-episode final season, the guys (played by Eddie McClintock and Aaron Ashmore) hit up a Renaissance Faire as they search for a dangerous artifact which animated both a horseless chariot and a life-size chess piece, then sicced them on attendees. To that end, as seen in the clip below, Pete and Steve talk up two Rennies played by Ryan Cartwright and Erin Way (aka Alphas‘ Gary and Kat).

As an added bonus: Beneath the video, you’ll find a series of images from the episode, including Cartwright-as-jester and McClintock-in-armor.

Elsewhere in the episode: When Claudia risks combining artifacts in a desperate attempt to revive her sister Claire from her coma, Myka struggles to prevent Artie from stopping her. 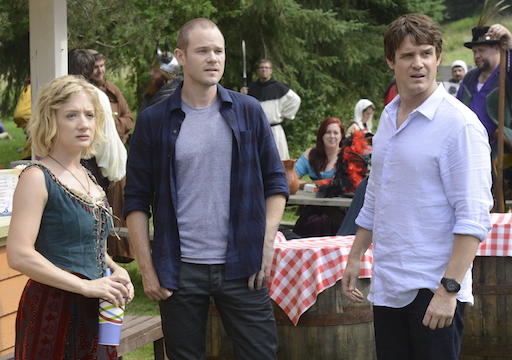