Are there any bombs left in the world, or were they all dropped during Thursday’s Scandal season finale? As promised, the hour was a non-stop parade of explosions, most of which made Maya’s actual church bomb seem like a firecracker in comparison. Let’s begin…

Never one to take her eyes off the prize, Sally rolled up her sleeves — or, rather, ripped them at the shoulder — and used the explosion as an opportunity to gain some much-needed, last-minute love from the American public. (Speaking of relentless survivors, Rowan did manage to live through last week’s run-in with Maya.)

Mellie’s Big Jerry secret was also finally brought to light, though Olivia picked a curious time to clue Fitz in on his father’s misdeed. After delivering one of his classic speeches about how he and Olivia are going to start a family someday, she interrupted him with the inconvenient truth.

Of course, Little Jerry quickly stole back everyone’s focus when he bled out in the middle of Fitz’s speech. A very specific strain of bacterial meningitis took the 15-year-old’s life, leading to yet another dark alliance, this time between Fitz and Rowan. Papa Pope offered him Maya’s head on a silver platter, though Fitz definitely didn’t read the fine print on their deal.

The next bomb was dropped by Olivia, herself, when she announced her decision to quit Olivia Pope & Associates. “It’s me, I’m the scandal!” she told Jake in the series’ most meta speech to date. “And the best way to handle a scandal is to shut it down.” Jake rebutted with an invitation to run away with him, which she happily accepted. (And, honestly, who wouldn’t?)

That’s when we learned the twists had only just begun! Not only is Maya alive, but Rowan is the one who orchestrated Jerry’s murder — with a little help from Tom, of course — all as part of his plan to get reinstated as Command of B613. And poor Harrison, the only person who managed to put the pieces together, ended up getting killed. (Or so we’re led to believe. Given Rowan’s track record, it’s possible he’s just storing Harry somewhere for safe keeping.)

Now, let’s cleanse our palate of this drama by reflecting on the grossest part of the episode: Huck and Quinn getting caught bumping uglies in the conference room at OPA. (I believe Abby put it best when she shrieked, “My eyes!”) That should be a terrific story for Huck to share with his newly discovered family…

Which Scandal finale bomb blew your mind hardest? Any new predictions for next season? Rate the episode below, then drop a comment with your review. 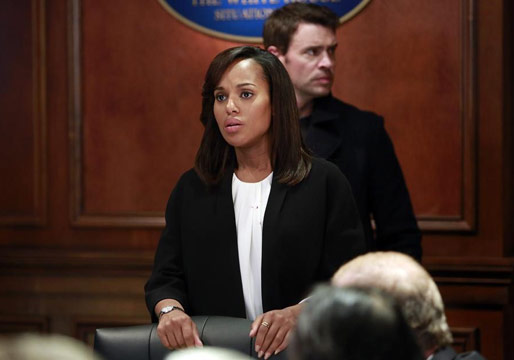