You’ve got to hand it to the stars of The Originals — somehow, they even make funerals look sexy.

New photos from the show’s April 29 episode feature the Big Easy’s various supernatural factions gathering together to say goodbye, and although the episode’s official description merely refers to the victim as “a fallen member of the community,” it shouldn’t take too much detective work to figure out who’s in the coffin.

But not all the funeral guests are among the living, or even the undead. Through the magic of Klaus’ horrifying visions, Papa Mikaelson also makes his triumphant return to The Originals — and it looks like his grip is stronger than ever.

Browse photos from the episode below, then drop a comment: Who do you think is in the coffin?

If you like TVLine, you'll LOVE our email news alerts! Click here to subscribe.
The Originals Sneak Peek: A Ghost From Klaus' Past Crashes [Spoiler's] Funeral 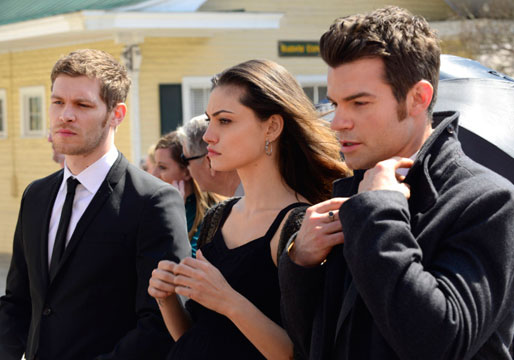