Is anyone else feeling dirty after watching this week’s Glee? The very special hour (and aren’t they all?) found the show’s various couples plagued with sex-related dilemmas, from those who weren’t having enough of it to those who still aren’t ready to have it at all. And then there’s Artie, who remains in a category all his own.

The bulk of the hour focused on Artie’s aversion to condoms — I know, I was surprised, too — and the STD-rama that followed. Strangely enough, it wasn’t even Artie’s chlamydia that ultimately repelled his flavor-of-the-week Julie, but rather his choice in women. As Julie chastised him in the middle of the hallway for sleeping with dumb-dumbs, I couldn’t help but wonder what happened to that sweet little boy who carelessly threw himself into the pool back in Season 3. Our little Artie is all-grown-up… and apparently, he’s a “creeper.”

Let’s see what everyone else was up to, shall we?

BATTLE OF THE BULGE | As much as I relished the image of Blaine scarfing down Cheetos like Britney Spears (circa 2007), I did not enjoy what his new diet did for his relationship with Kurt, nor did I like seeing what it did to his own self-image. After attempting to sabotage Kurt’s newfound hotness, Hansel and Gretel-style, Blaine finally caved and admitted he’s been eating his feelings. That’s why he’s been inhaling Cronuts, watching porn and not having sex with Kurt; he feels unworthy to share a bed with him. I’m glad they patched things up by the end of the hour, but I wish these two could catch a break. New York has been hell on their relationship — when they’re not fighting with each other, they’re getting beat up on the street — and I’m starting to worry about the future of Klaine.

MERCEDES’ WAIT PROBLEM | Considering we all thought Samcedes was over and done with years ago, Sam and Mercedes’ relationship has turned out to be one of Glee‘s most surprisingly satisfying New York storylines. This week’s episode found Mercedes pumping the brakes on her sex life with Sam before it even hit the road, forcing the former stripper to decide if he could live without doing the deed until marriage. In a sweet turn of events, Mercedes came home to a candlelit apartment, where Sam told her that he could live without sex — but not without her. Sam may be brainless, but he’s definitely got heart. (Side note: Did Mercedes really sing Foreigner during a church service? That was a stretch, even for Glee.)

FINCHEL SHOUT-OUT | Rachel didn’t get much screentime this week, but she definitely made the most of her scenes with Mercedes. Who among us didn’t get a little misty when she reflected on her first time with Finn? She didn’t have to say his name; I was already having flashbacks to that magical, awkward night at the Hudson household. Speaking of which, TVLine recently asked executive producer Ryan Murphy about Rachel’s romantic future, and it doesn’t sound like we should expect to see her with any new arm candy this season. As for Season 6? That’s another story.

And now, we play the rating game…
Artie: “Addicted To Love” — Rating: B
Mercedes: “I Want To Know What Love Is” — Rating: B+
Kurt and Blaine: “Love Is A Battlefield” — Rating: A-
Mercedes and Artie: “Let’s Wait A While” — Rating: B

What did you think of this week’s Glee? Vote for your favorite musical number below, browse pics from the episode, then drop a comment with your review of the *sensational* hour. 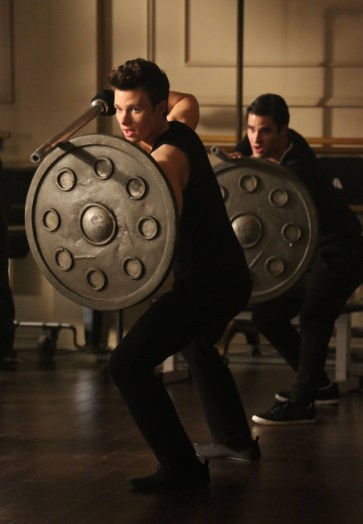