ABC’s Castle will experience a 1970s flashback on April 21, as evidenced by the boss threads on display in this fresh batch of photos.

In the episode “That ’70s Show,” when construction workers find the body of an infamous mobster who disappeared four decades ago, the only witness is a man (Raising the Bar‘s Jon Polito) who thinks it’s still the 1970s. To uncover what he knows, Castle, Beckett et al must play into his delusion and “party like it’s the last days of disco”  — in other words, dress like my older siblings back when I was obsessed with Star Wars.

RELATED | Castle Season 6 Finale Spoilers — Why Is a [Spoiler] Being Cast?!

Check out the photos below (it’s scary how much Ryan looks like The Americans‘ Phillip), and I’ll catch you on the flip-side. 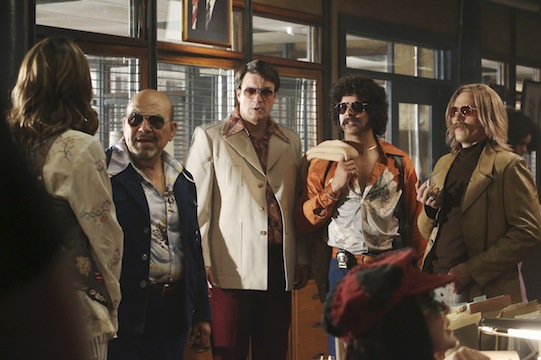