Old friends can come in handy. Dragons are scary. Gold hands are not chick magnets. And the Dornish royal family knows how to get down (and throw down).

That’s just a smattering of what we learn in Game of Thrones‘ fourth season opener, which finds King’s Landing prepping for Margaery’s wedding to the antichrist Joffrey, Oberyn Martell making a memorable entrance and Arya returning to her dancing lessons. Read on as we review what took place in “Two Swords.”

HOUSE STARK | Arya complains to the Hound that she wants her own horse, but he’s not really the give-a-cute-girl-a-pony type. They happen upon a tavern, and just as he’s deciding that there are too many men inside to make causing a ruckus worth his while, Arya notices that one of the patrons is Polliver: the man who killed Lommy and stole Needle, the sword Jon gave her. (Because this is somewhat of a family site, I won’t repeat what the Hound calls people who name their weapons.) Before he can stop her, she strides toward the tavern, and all he can do is follow.

The men inside wear the king’s colors, terrorize the tavern keeper and his daughter and are mightily offended when the Hound informs them what they can do with their king. By that point, the tension in the room is so high I’m relieved when a fight finally breaks out, even if it means I have to watch the Hound repeatedly impale a dude via eye socket. Arya watches with interest then, toward the end of the melee, jumps in and kills one man, grabs the discarded Needle and slowly approaches the man who murdered her friend.

Just as he recognizes her, she slides the blade into his throat vertically up under his chin, causing him to sputter gouts of blood and then die. Next thing we know, the Hound and his horse are ambling away from the tavern, followed by Arya – outfitted with Needle – on a mount of her own.

HOUSE MARTELL | The Dornish Prince Doran won’t attend Joffrey’s wedding, so he sends his brother, Prince Oberyn, in his stead – though Oberyn skips the official welome committee proceedings headed up by Tyrion. Bronn wonders where the prince might be. “You’re famous for f—ing half of Westeros, you’ve just arrived at the capital after two weeks of bad road. Where would you go?” Tyrion asks his sellsword. “I’d probably go to sleep, but I’m getting old,” Bronn replies. (Heh.)

At that very moment, the Dornish warrior prince is indeed auditioning playmates at Littlefinger’s establishment, and he’s doing so with his paramour, Ellaria Sand. They opt for a very bendy young woman and a rather willing young man – who gets whom seems pretty fluid – but are interrupted by some Lannister men singing “The Rains of Castamere” in the room next door. Oberyn can’t let it go, so he barges in, mocks them and smiles dementedly as he puts his dagger through one of their wrists, pinning him to the table like a butterfly about to be pressed.

Oberyn frees the man as Tyrion arrives, and the two second sons have a chat outside. Long story short: Martell is there for Joffrey’s wedding… aaaaaand to seek revenge on Tywin Lannister for allowing/ordering Gregor “The Mountain” Clegane to rape and kill Oberyn’s sister Elia and to kill her children. The Dornish prince has  a message for Tyrion’s pop: “Tell him the Lannisters aren’t the only ones who pay their debts.”

HOUSE TARGARYEN | We catch up with Daenerys as she lovingly strokes one dragon’s head and the other two frolick off in the distance. But when they draw near, they drop a bloody lamb at her feet like a cat with a dead mouse, and that starts all three dragons tussling for the prize. Dany tries to calm them and nearly loses a hand for her troubles; as Ser Jorah notes, the beasts can never be tamed – “not even by their mother.”

But the khaleesi has other problems to attend to; her rather impressive army marches onward toward the next slave city it hopes to liberate, Mereen. By her side are Missandei, Jorah, Barristan Selmy, nuDaario Naharis (hey, it’s Liam from Nashville! Scarlett is going to be hella ticked off when she finds out you’re not really in Tokyo) and Grey Worm – the latter pair don’t like each other very much.

HOUSE LANNISTER: DAMNED-IF-YOU-DO EDITION | Sansa is so consumed with thoughts of her dead mother and brother, she won’t eat (not even lemon cakes!) and prefers to spend her time alone in the godswood. Tyrion tries mightily to console his young wife, recalling the time he spent with Catelyn. “She wanted to have me executed, but I admired her,” he says lightly. (Heh.) But the redhead won’t hear it; she takes off and later runs into Ser Dontos, the drunken knight-turned-castle-fool Sansa saved from death on Joffrey’s name day. Dontos is pickled, as usual, but he’s also thankful: He gives her a necklace he says was his mother’s, and she reluctantly accepts..

Meanwhile, Shae forces an encounter with Tyrion by appearing in his bed, half naked. Unlike pretty much every other time this has happened, he’s displeased. Everyone wants to kill him, and it’s not safe for her either, he explains. “You… need… to relax,” she coos, licking his finger and attempting to put it in her pigeon pie. He stops her, and she flips out, yelling about how he tried to ship her away with diamonds – he has no notion of what she’s talking about – and they end on a very bad note as she leaves… and another maid overhears the entire thing.

HOUSE LANNISTER: UNHAND-ME EDITION | Elsewhere in the castle, Jaime gets a verbal beat-down from Tywin and then tries out the golden hand Cersei spent “days” working with an almost-maester to design. At her twin brother’s raised eyebrow, the queen regent saucily concedes, “Better part of an afternoon.” (Side note: Drunk Cersei for the win! And, from the look of things, there’s going to be a lot of winning this season.)

I feel the need to note that Jaime has cleaned up considerably since last we saw him. A haircut, a non-soul-wrenching bath and a return to the Kingsguard have done him well; he can slay my king anytime. Unfortunately, Cersei doesn’t feel the same way. Once Pycelle’s replacement has left the room, Jaime is all, “Ever made it with a gold-handed man?” and she’s all, “Not happening, bro. (No seriously. You’re literally my brother.)”

Cersei is mad at Jaime for leaving her alone – when he got captured – and isn’t sure she’s ready to forgive. He argues that his only thought during that muddy, amputating, bear-brawling nightmare was to get back to her. “You took too long,” she says coldly… and they’re interrupted by the maid who overheard Shae and Tyrion’s spat.

It’s OK, Jaime; at least you have a shiny new sword of Valyrian steel, which Tywin forged from Ned Stark’s masterpiece Ice, to keep you company – and Brienne! She’s still in King’s Landing, too! After the lady knight visits Margaery and vows to avenge Renly’s death-by-shadow, she makes sure to let Jaime know she plans to hold him to his promise to return the Stark girls to safety. “Are you sure we’re not related?” he asks her, annoyed that everyone in his family seems to have a beef with him. “You’ve got the hair for it, if not the looks.”

THE WILDLINGS/THE MEN OF THE WALL | While Ygritte and Tormund restlessly await Mance Rayder’s signal to attack, he questions whether she actually killed Jon Snow like she said. She’s such a good shot, he observes, “If that boy’s still walking, it’s because you let him go.” They’re interrupted, though, but the arrival of some bald, scarred, cannibalistic Thenns who – based on the appendages they start to cook – have clearly done some grocery shopping in the “Fresh Men of the Night’s Watch” section of the supermarket.

Meanwhile, Jon Snow – who has heard about the Red Wedding deaths and mourns Robb (though – shocker! — doesn’t mention Catelyn) – goes before a council of his Night’s Watch brothers to answer for his transgressions. He admits to fully integrating himself into the free folk’s society and sleeping with Ygritte, but he’s more worried that the men in black aren’t listening to his warnings of war. Thank goodness for the always cool, older than dirt Maester Aemon, who saves Ned’s bastard from death (“If we beheaded every ranger that lay with a girl, The Wall would be manned by headless men,” he quips). Still, it doesn’t seem like the crows are very ready for the storm headed their way.

Now it’s your turn! What do we think about Arya’s increasing willingness to kill people? Had you forgotten just how irritating little Joffrey is? And were you as delighted by Lady Olenna’s reaction to Brienne as I was? Sound off in the comments – and if you want a quick rehash of where our characters are at the top of the hour, click through the gallery below. 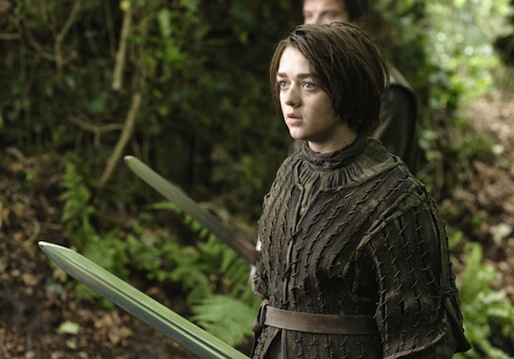