Trying to escape the wrath of Supernatural‘s notoriously prank-happy leading men Jensen Ackles and Jared Padalecki is next to impossible.

So learned series regular Misha Collins when he directed his first episode of the CW drama (airing tonight at 9/8c) and got several pies in the face courtesy of his co-stars.

But the actor also devised a handy incentive for getting Ackles and Padalecki to deliver their best onscreen.

Read on to find out what got the boys to behave. Plus, Collins teases upcoming episodes that will find Castiel having problems with his powers — and taking serious notice of Dean’s new marker!

TVLINE | Stepping behind the scenes as a director, did you learn anything about the show that surprised you?
Yeah, I learned a lot. I learned that when they go location scouting, the key department heads know really good restaurants and they get really good lunches. That was an eye-opener. It was interesting seeing everything from a different perspective because you sit on set for so many hours as an actor. By virtue of being there and logging such long hours, you really know what’s going on. But when you change chairs and look at the job from another vantage point, you see all kinds of things. You see what a pain in the ass it is to deal with actors. You watch the clock like a hawk. You just want more time, all day long, and you don’t get it. It’s very cool. It’s a very engaged position. You really have to be paying attention all the time, which I enjoyed.

TVLINE | What was the biggest challenge for you as a director?
I’m a first-time director, so a lot of it was new to me, and I’m learning the ropes. That, in and of itself, is going to be challenging. I was also dealing with Jared and Jensen as the primary characters. That brought with it its own set of particular challenges. They were constantly pranking me, throwing pies at my face and that sort of thing, which gave me a whole second set of things to be worrying about in any given moment. But all in all, it was a remarkably good experience. The boys were so excited to, for example, throw pies in my face, that the time in between [pranks], they actually did their jobs very well — because they were trying to get me off guard. So it actually ended up working out pretty well.

TVLINE | What’s the key to getting a good performance out of Jared and Jensen?
It’s very simple: Find a way to convince them if they do it well — and quickly — that they’ll get to go home. That’s the carrot that you dangle in front of the boys. It’s very simple manipulation. TVLINE | Jensen’s directed some episodes of the show. Did he give you any tips or advice?
He gave me lots of tips and lots of advice, and it was all very helpful. The fact that Jensen has directed before made him a little bit nicer to me than he would have otherwise been. He was, obviously, fully complicit in pranking me, but he also wanted to support me and make sure that I had a good experience as a director. He was actually very helpful, in many respects, for a complete a**hole.

TVLINE | It sounds like they gave you a pretty juicy, mythology-driven episode. You have Henry’s return and Abaddon. What’s in store for the episode, storyline-wise?
We do a flashback. We go back to the 1950s, which is obviously referenced in the episode’s title, “Mother’s Little Helper.” I can tell you that we have a messload of demon nuns to deal with, which is pretty awesome. Demon nuns, I think, is really the headline here. Crowley is trying to recruit Dean to collaborate with him on his evil project.

TVLINE | What is Cas up to the next time we see him? Last we saw, he had some followers.
Cas had some people volunteering to follow him, but Cas is definitely a reluctant leader. He’s continuing on his mission to hunt down Metatron. That’s his primary objective. As the season progresses, his objective of capturing Metatron and the boys’ mission will converge and they will be collaborating with one another.

TVLINE | Will Cas take notice of what’s going on with Dean and the Mark of Cain?
He will, and he takes ominous notice. He knows it’s a bad thing.

Supernatural fans, check out photos from Collins’ directorial debut below. 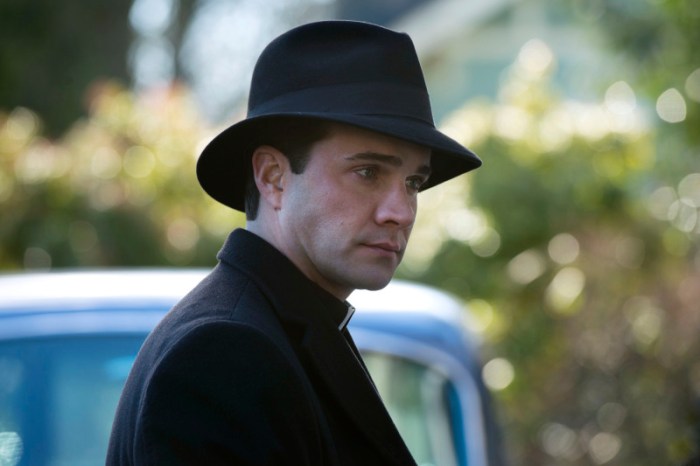