ABC’s Grey’s Anatomy has a new someone playing a doctor and a pair of someones “playing doctor” in the April 3 episode, and we’ve got photos of both.

In the episode “You Be Illin” — in which a case of the flu races through the halls of Grey Sloan, threatening a big presentation of Derek’s — TV journeyman Patrick Fabian (you say Big Love or Veronica Mars, I say that sketchy Mr. Murty) makes his debut as Dr. Oliver Lebackes, a new pedes specialist who may have a thing or two to show Alex and Arizona.

RELATED | ‘Ship Shape: How Your Fave Pairs From Grey’s, Once Upon a Time and Other Shows Are Faring

Elsewhere in the episode, at least one couple isn’t afraid about possibly sharing germs, based on a bit of “elevator action” on display…. [Cue Aerosmith earworm.]

If you like TVLine, you'll LOVE our email news alerts! Click here to subscribe.
Grey's Anatomy First Look: The (New) Doctor Is In -- Plus, Who's Lovin' in an Elevator? 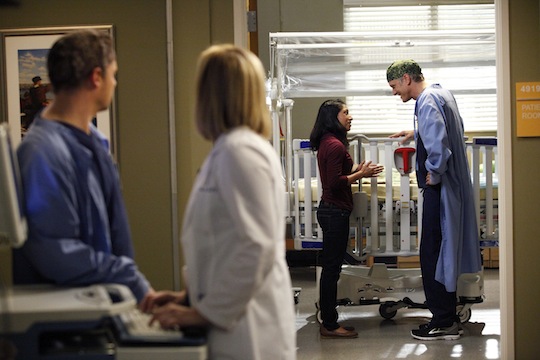