All aboard, Mad Men fans!

The AMC drama on Wednesday released three new shots heralding the start of its upcoming final season — which bows April 13 at 10/9c — and the photos show some of your Sterling Cooper & Partners favorites preparing to get high. (In a plane, of course. Who do you think we are? Megan trolling for joints on a Hawaiian beach?)

Speaking of Mrs. Draper, we see her and Don on the airport curb, plus Don and Roger getting a little in-flight refreshment and Peggy and her mentor killing time in a pre-flight lounge. (Might we infer that this means the disgraced Don will be back at the firm this season?)

Click through the gallery below, then hit the comments with how you think the first half of Mad Men‘s final season will unfold. 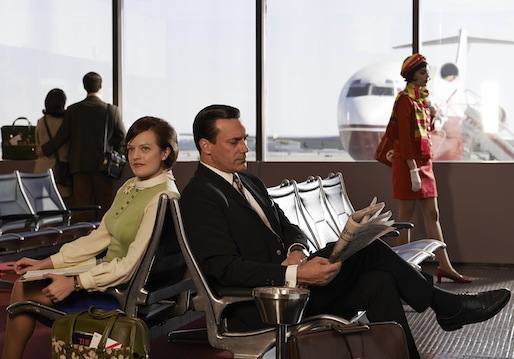