In a lot of ways, Monday’s premiere of NBC’s Late Night With Seth Meyers felt like a walk down Saturday Night Live Memory Lane. After going into full-on “Weekend Update” mode with his opening monologue, Meyers palled around with Amy Poehler, all the while letting band leader Fred Armisen be as weird/talented as he pleased.

That, plus a visit from Vice President Joe Biden — who was forced to awkwardly address the time he referred to NYC’s LaGuardia as a “third-world” airport — made for a fairly solid Late Night debut.

While it didn’t quite match the manic, star-fueled vivacity of Jimmy Fallon‘s Tonight Show premiere, TVLine managed to hone in on several parts we enjoyed, and definitely want to see more of:

MEYERS GETS PERSONAL | Honestly, we never thought we’d be this interested in Meyers’ personal life. A shout-out to his wife in the audience led to a charming, self-deprecating tale about a recent weekend getaway in Connecticut — and then came the pièce de résistance: a photo of Meyers holding his tiny greyhound puppy. Did we mention it was wearing a tiny fleece jacket? That part’s pretty crucial.

VENN DIAGRAMS | Prior to Late Night, the term “Venn diagram” gave us nothing but nightmarish flashbacks to grammar school. Now, thanks to Meyers’ hilarious segment, we can all feel free to laugh again. (Our favorite: “Snow + toilet paper = things you won’t find in Sochi.”)

COSTAS-VISION | Those who insist Pink Eye is no laughing matter clearly missed Meyers’ “Costas-Vision” segment, which revealed what the Olympics looked like through the infected eye(s) of NBC anchor Bob Costas.

A TOUCH OF STEFON | You had to look closely to notice it, but perched atop Meyers’ Late Night desk was a tiny Russian Doll-style Stefon figure. Somewhere, Bill Hader was smiling — and probably covering his mouth and giggling.

What did you think of Meyers’ Late Night debut? Vote in the poll below, then head to the comments section with your reviews. 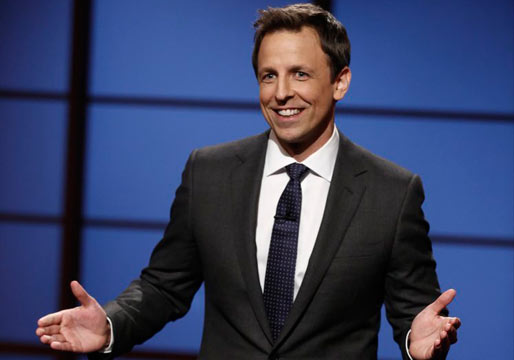