April’s possibly derailed wedding seems to have put all of Grey+Sloan’s finest on edge, based on this first flurry of photos from the Grey’s Anatomy midseason premiere.

Per the official synopsis for the Feb. 27 episode, titled “Take It Back’ and picking up about 10 minutes after Jackson’s fall finale outburst, “The doctors face the consequences of the events that took place at April’s wedding. Meredith feels betrayed when Derek goes back on a promise, Alex is furious after returning to the hospital and hearing the news about his father (returning guest star James Remar), and Arizona and Callie decide whether or not to move forward together. Meanwhile, Bailey realizes she was wrong about the motive behind Ben’s decision to move back to Seattle.”

At least two bits of the above drama are depicted in the sideshow below. Cast your votes now for how/where things will go for “Calzona.” (And is Arizona helpfully rounding up gifts to return or to deliver to a new bride and groom?) 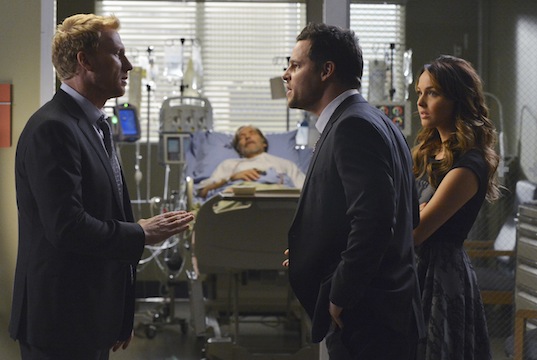