Darth Vader has a black belt in Force Choking, holds a PhD in psychokinesis and can wield a lightsaber in his sleep — but how is he at karaoke?

Thursday’s The Big Bang Theory (8/7c, CBS) aims to answer that question when Sheldon spends a wild night out on the town with special guest star James Earl Jones that includes a detour to a karaoke bar.

As we first reported, Sheldon tries to recruit Jones (and fellow Star Wars vet Carrie Fisher) to participate in the first (and, likely, last) annual Sheldon-Con.

Scroll through the gallery below for exclusive images of the big Sheldon-Vader duet, as well as pics of a hilariously-unhinged Fisher (who I’m guessing does not want to play Sheldon’s reindeer games.) 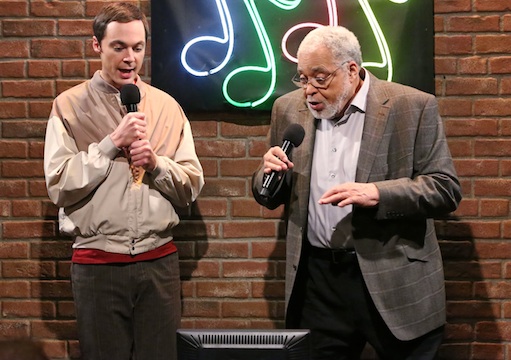