Monday the 13th is Castle sleuth Kate Beckett’s lucky day, as she will finally meet her intended’s father.

In the ABC drama’s Jan. 13 episode, “Deep Cover,” the murder of a video store clerk leads Beckett & Co. to the man sometimes known as Jackson Hunt (returning guest star James Brolin). But as reported elsewhere and confirmed by TVLine, when Kate meets Rick’s spook-y pop, he’ll be using a pseudonym and only Rick will know who this silver fox truly is.

Brolin told AntennaFree.TV that with this encore he hoped to present “the complete other side of this character, the one you might be afraid of.” And along those lines, series creator Andrew W. Marlowe told us that as the episode plays out, “Castle begins to wonder whether he can trust this mysterious stranger.”

RELATED | Winter TV Spoiler-palooza! Your Guide to Castle and 30 Other Returning Favorites 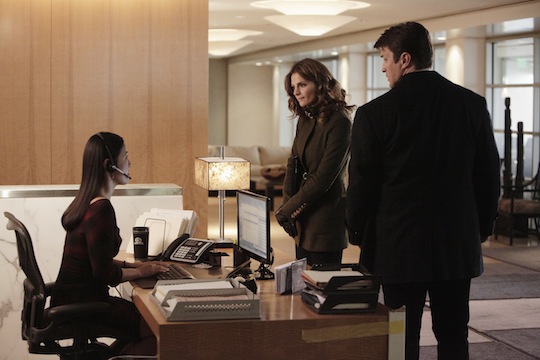