We know this makes us bad people, but isn’t it always kinda refreshing to watch one of Revenge‘s Graysons take it on the chin?

If you agree, you’ll enjoy this set of photos from the ABC drama’s next episode (Sunday, 9/8c), in which duped groom/attempted assassin Daniel seems to act rather boorishly toward his recently suicidal crush, Sara — and then gets what’s coming to him, courtesy of Jack.

Elsewhere in the shots from the hour — the official synopsis for which promises a “game-changing revelation” that ignites “a new path of destruction” — Jack can’t decide which face to make at Margaux, and a vulture-like Victoria perches outside of Emily’s hospital room.

Peruse the photos, then decide whether Daniel getting cold-cocked is going to be your new wallpaper, or just your screensaver. 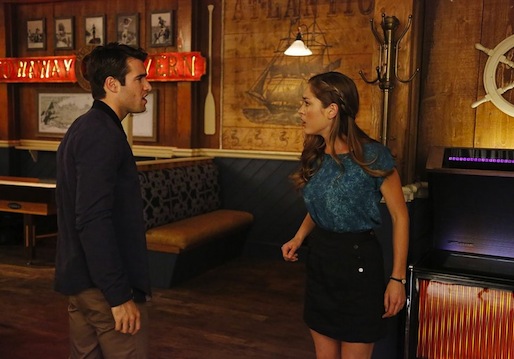