The CW is tweaking its plan for The Flash, by giving the Scarlet Speedster a formal standalone pilot versus a planted pilot toward the end of Arrow Season 2.

The plan to introduce Barry Allen — an assistant forensics investigator working for the Central City police department — via the sophomore drama Arrow remains unchanged. As seen in the photos below, the character (played by Glee’s Grant Gustin) will debut in Episode 8, “The Scientist” (investigating a seemingly impossible robbery at Queen Consolidated’s Applied Sciences Division) and also appear in Episode 9, “Three Ghosts.”

UPDATED: Once again, with feeling: These scenes below are set at Queen Consolidated’s Applied Sciences lab.

But whereas this season’s Episode 20 was to be a Flash-heavy [insert iPad joke] look at the costumed crimefighter, our sister site Deadline reports that The CW instead will forego that third Arrow appearance and shoot a standalone, David Nutter-directed pilot co-written by DC Comics Chief Creative Officer Geoff Johns and Arrow EPs Andrew Kreisberg and Greg Berlanti.

If you like TVLine, you'll LOVE our email news alerts! Click here to subscribe.
The CW Changes Plan for The Flash Pilot -- Plus: 7 Photos from Barry Allen's Arrow Debut 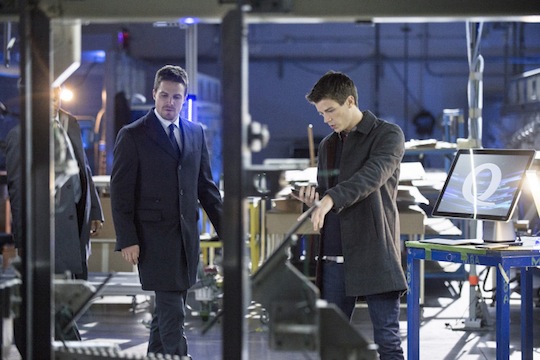